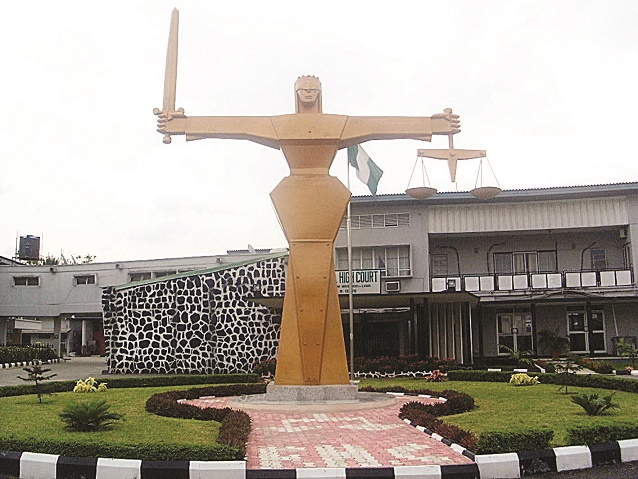 Chukwueze Ewerem, a Lokoja-based legal practitioner, has been charged to court for complicity in a 2.4million Naira fraud.

Ewerem, alongside two others, Samuel Adeola and Alfa Umar, were charged before the Chief Magistrate’s Court sitting in Lokoja, the Kogi state capital.

He was arraigned on an alleged offence of fraud bordering on criminal conspiracy, breach of trust and forgery. The crimes were allegedly perpetuated against the judiciary of the state.

The co accused, Samuel Adeola and Alfa Umar are both staff of the court’s Process Unit under the Litigation Directorate, while some others are said to still be at large.

They all pleaded not guilty to the three-count charge brought against them which are punishable under sections of the state’s penal code.

The offences reeled by the prosecution counsel are “criminal conspiracy, criminal breach of trust by clerk or servant using as genuine forged document and causing disappearance of evidence contrary to sections 97(2), 314, 366 and 167 of the Kogi State Penal Code”.

The case is an offshoot of the discovery of the fraud of N2.4m in revenue that should have been due to the High Court of the state which was reportedly diverted into private accounts.

The crime was reported to have been orchestrated through a syndicate that has been steadily used to defraud and deny the third arm of government revenues due to her.

Upon the discovery and submission of the report of the fraud by the newly created Revenue Services Directorate of the court, the acting Chief Judge of the state, Justice Josiah Majebi, had, in line with his reformative policy to sanitize and restore the integrity of the state judiciary, ordered a thorough investigation of the matter to bring perpetrators to book.

The report had revealed that the sum of N2.4m, said to have been paid into the court’s account as judgement debt revenue sometime in October 2022 with the bank teller presented as evidence of payment was not paid despite the evidence of payment showing so. It was gathered that the payment did not reflect in the court’s bank statement for the month.

In line with the Chief Judge’s vow to sanction and hand over anybody, whether staff or members of the public found wanting in the crime to the police for necessary legal action, the matter was reported at the Kogi State Command of the Nigeria Police which quickly swung into action and subsequently took the defendants to court upon completion of investigations.

After the charge was read to them, the defendants who were respectively represented by counsels pleaded not guilty to the offences levelled against them.

According to the Prosecution counsel, G. O. Otowu, the crime was committed around the 25th of October, 2022 in Lokoja within the jurisdiction of the Court.

The charge states that the defendants fraudulently diverted the sum of N2.4m meant to be paid to the Kogi State Judiciary account.

The defendants were, however, granted bail by the court after the presiding Magistrate, Musa Mopah, considered their application.

“I am of the opinion that the application has merit. I admit the three defendants to bail in the sum of N400,000 each and a surety each in like sum. Two recent passport photographs of a surety are to be lodged at the registry of the court.

“The surety should each deposit original title documents with statutory Right of Occupancy of land situated at Lokoja and must have a fixed and traceable address.

” He should depose to an affidavit of means. Both defendants and their sureties are to avail the registry of the court their bank account numbers and BVN” the Judge ruled.

Also, the Judge asked both defendants and sureties to report at the registry of the court every Monday and Friday throughout the pendency of the case.

The case was thereafter adjourned to the 7th of December 2022 for the continuation of hearing while the defendants were conditionally released after perfecting their bail bonds.