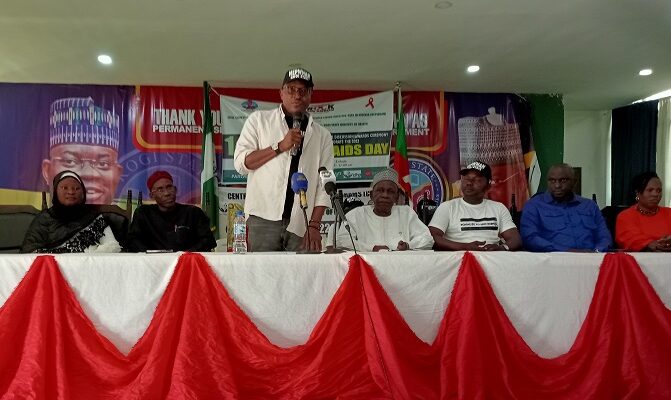 Civil Society for HIV/AIDS in Nigeria (CISHAN), Kogi state branch, has reiterated its commitment to drive engagement that will ensure people living with HIV/AIDS have easy access to health care services.

CiSHAN urged government and other care providers to ensure equal access to HIV testing, prevention and treatment services to all residents, regardless of location or status.

Secretary of CiSHAN, Amb. Idris Ozovehe Muraina, made this known in Lokoja on Thursday at the one-day stakeholders round table meeting to mark this year’s World AIDS Day.

The stakeholders round table meeting organized by Civil Society for HIV/AIDS in Nigeria (CISHAN) and Kogi State Ministry of Health to commemorate the 2022 World AIDS day.

Muraina, who stood in for the State Coordinator of CiSHAN, Mrs. Christy Oluwole Abayomi, urged government to make test kits available so that people can ascertain their status and access healthcare services.

“We want to get to a point where everybody have access to HIV/AIDS services. Even if you are in your community, you should have access to testing and counseling services.

“We need to factor these into our health policies as a state. We need to also look at taking health care services to the people giving the culture of rushing to the hospital when the health conditions had deteriorated and had become an emergency situation.

“We brought the stakeholders together so they can drive home the ‘equality to end AIDS’ which is the theme of this year’s event,” he said.

In his address, Governor Yahaya Adoza Bello reiterated the commitment of the state government to funding the Kogi State Agency for Control of AIDS (KOSACA) and the state HIV response.

The Governor, who was represented by the Commissioner of Health, Dr. Zakari Usman, called on global leaders and citizens to boldly recognize and address inequalities that are holding back progress in addressing issues relating to HIV/AIDS.

He noted that the health intervention programs of his administration has made it possible for more persons to have access to free HIV screening, prevention and treatment services.

Governor Bello was honoured with an award of excellence and made grand patron Network of People Living With HIV/AIDS in Kogi state.

The civil society also recognised the efforts of Health and Women Affairs Commissioners and other stakeholders who have supported the cause of prevention and management of HIV/AIDS in Kgi state.

Earlier, the Health Commissioner said no fewer than 43,373 people are living with HIV/AIDS in Kogi state.

He urged the people of the state to disregard misconception by some citizens that HIV is no longer in place, stressing that they should in their own interest avail themselves of the preventive and curative measures provided by government to tackle the epidemic.

He vowed that Kogi state government would not relent to reduce to the barest minimum the havoc of HIV/AIDS in the state through preventive and curative means.

Zakari said government will encourage reform of laws, policies and practices to tackle the stigma and exclusion faced by people living with HIV/AIDS.