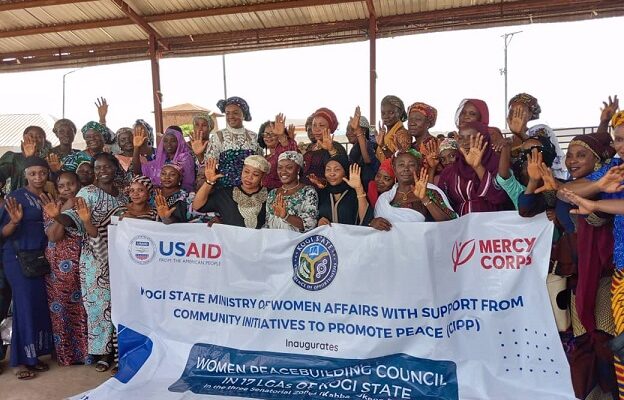 The Kogi State Government on Friday, restated its commitment to increase women in leadership and active participation in conflict resolutions and management.

The Commissioner for Women Affairs, Hajia Fatima Buba, gave the assurance in Idah, at the inauguration of the members of Women Peace-Building Council in Kogi East Senatorial district.

She said that the project was funded by the United States Agency International Development (USAID), implemented by Mercy Corps under the Community Initiatives to Promote Peace (CIPP).

She noted that council members in all the local government areas in Kogi Central and Western Senatorial districts as well as Dekina and Igalamela in the Eastern district, had earlier been inaugurated.

Buba, who was represented by the Permanent Secretary of the Ministry, Mrs Modupe Andi, reaffirmed the commitment of Governor Yahaya Bello’s administration to ensure women’s participation in politics and leadership positions at all levels.

She stressed that the time has come to mobilise youths and women at all levels in order to discourage violence and embrace peace in the communities towards achieving peaceful election.

She commended the Mercy Corps-CIPP for the collaboration, saying it would prevent violent conflict in the most at-risk communities.

In his remarks, the Representative of Mercy Corps-CIPP, Mrs. Eunice Agbogun, said the contribution of women to peace building remained critical as they also doubled as home builders.

Agobgun, who doubles as the Executive Director,  Challenge Parenthood Initiative (CPI), emphasised that women remained a better mediator in conflict resolution because of their soft nature.

“Women are strategic , skillful and very powerful. More so, they have the natural capabilities to intervene when there is conflict,” she said.

She stressed the need come for women to get involved, saying they are key in peace building process and the most hit during crises.

On her part, the Director of Women Affairs in the Ministry, Mrs. Motunrayo Babatunde, stated that the council’s goals will be to discourage violence and advance peaceful coexistence.

She added that the council would deal with underlying reasons of disputes and violence, expand the number of women in leadership positions and integrate women’s leadership at state, local and ward level.

The director said that their operational guidelines would be to promote peace towards the 2023 general elections and instruct youths and the public to abstain from violence.

Yakubu said the inauguration had rekindled a new fire in them as they are now more courageous to venture into every aspect of life especially politics.

The highlight of the occasion was the official inauguration of the 15-member of the Peace Building Council by the Commissioner, from each of the seven local government areas: Idah, Omala, Ankpa, Bassa, Ofu, Ibaji and Olamaboro.

Earlier, the team paid a courtesy visit to the Palace of Attah Igala, His Royal Majesty, Matthew Opaluwa, to appreciate him for his fatherly role in ensuring that the inauguration was a success.

The royal father commended Kogi Government and Mercy Corps on the inauguration of the council in all the three senatorial districts of the state.

The Attah stressed the need for the peace building council to continue to sue for peace, advising them to focus their campaigns on youths to ensure peaceful 2023 general elections.