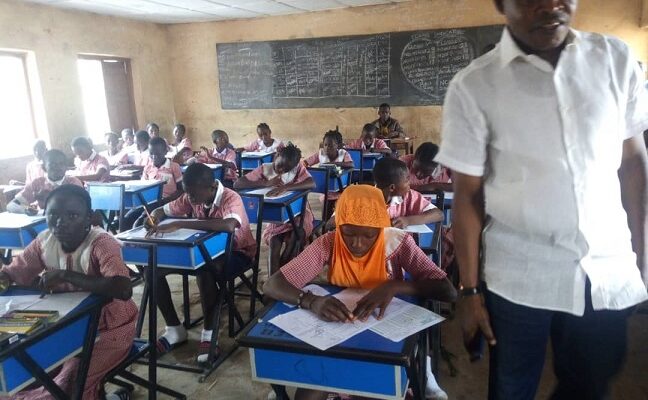 The West African Examinations Council (WAEC) has de-registered 61 secondary schools in Kogi state for involving in gross malpractices in the 2022 WAEC examinations.

The state commissioner for education, science and technology, Mr Wemi Jones disclosed this in Kabba on Thursday during the final distribution of chemistry and physics textbooks to 95 senior secondary schools in Kogi western senatorial district under the ministry’s schools adoption and mentorship programme.

The textbooks was sponsored by Alhaji Usman Ahmed Ododo, the Auditor General of local government, to enhance the studies of science subjects in the state.

According to him, similar complain was tendered by the examination body 2019 where 51 secondary schools were involved, noting that things have started getting better in 2020, 2021 when the numbers of schools deregistered by WAEC reduced from fifty-one to one as a result of serious warning from the ministry of education to principals of schools.

The Commissioner lamented that just on Thursday this week WAEC officials forwarded a letter to his office intimating him that 61 secondary schools in the state were grossly involved in examination malpractices in the 2022 examinations.

“This I am not going to let it go. We are going to sanction any principal found wanting in this unwholesome behaviour that is tarnishing the good image of the state.

“The ministry of education will setup a committee that will investigate the involvement of principals in this disgraceful act before we sanction appropriately to serve as deterrent to others because the state government can not be investing hugely in education sector then somebody some where will be sabotaging our effort giving the state bad names.

“We are aware that when WAEC charged registration fees of N23,000, principals charged over N40,000 ‘logistics’ involved to indulge in examination malpractices. We are not unaware, we will curb the situation by sanctioning whoever found wanting in the act through the 2020 Kogi state educational law,” he assured.

The Commissioner who also frown on the existing of illegal private tertiary institutions in the state, assuring that very soon the ministry would clampdown on them.

Spread the love
Tweet
Previous Post2023: We Are Democrats, We Do Not Need Arms to Win Elections, Fanwo Replies Group Next PostKogi INEC Extends Deadline For PVCs Collection from December 12 to January 22