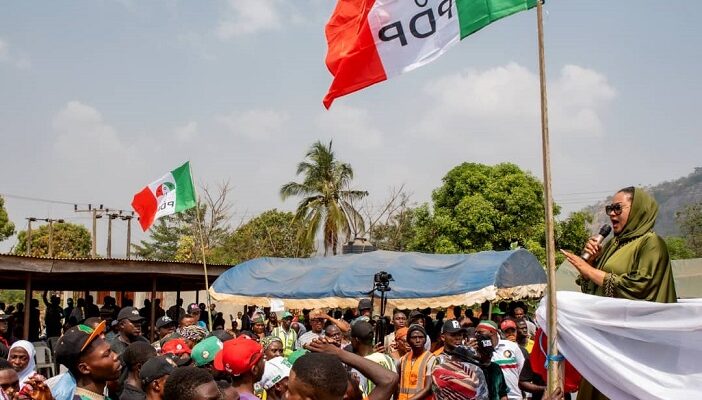 The rousing welcome of the people of Ogori Magongo LG further signposts the acceptance of the candidature of Barr. Natasha and PDP by the people of Kogi Central senatorial district.

The ten Wards of the local government converged at different locations where the residents trooped out in their numbers to welcome the PDP senatorial candidate and further declared their unalloyed support for her vision to fix the future and herald a new beginning for the people.

Speaking on her ambition, Natasha called on the people not to cheat themselves of the opportunity to correct the mistakes of the past on February 25, 2023.

“Don’t cheat yourself, I trust you know what to do at the next election, I believe you will not vote to continue with this current situation, I hope you will vote for me and every other PDP candidates.

“Without a doubt,  you have seen for yourself and you can testify with the way things are going on, poverty is man made and to get out of poverty it requires the action of man, God will not come down to change our situation. It’s time to take action and change our story.

“Our presidential candidate stands miles ahead because he is the only one that has committed to revive Ajaokuta steel company so that our youths will have jobs and the downstream sector will be boosted.

“The only thing we need from you is to come out in your numbers, encourage your relatives and friends to collect their PVCs and vote for PDP.

“I look forward to working with all of you, and celebrate with you on February 25, 2023”, she concluded.

The PDP also received executive members of APC who dumped the party and declared their support for the candidature of Natasha Akpoti-Uduaghan, Atiku Abubakar and other candidates of the party.

Spread the love
Tweet
Previous PostSolomon-Adesanya, Politician Who Fled Kogi in 2019 Yet to Return, Says Family  Next PostAttempt to Rubbish My Annual WAEC Grant to Students Misguided, Anti-Yagba - Hon. Abejide