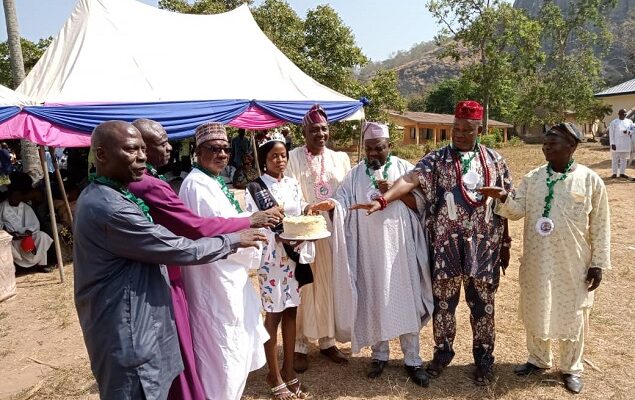 He called on sons and daughters of Ogidi community to see this as a challenge, come home and contribute their quotas to the development of the town.

Thomas made the call on Monday, December 26 at  Ogidi while speaking at the 17th annual general meeting of the Ogidi Development Association (ODA).

The Commissioner for Insurance said the idea of waiting for government to provide all the basic needs of the community will not work , saying that time has come for indigenes to intervene.

Thomas who is also an illustrious son of Ogidi appealed to parents to prevail on their children living abroad to come home and contribute to the development of Ogidi.

He commended successive leaderships of ODA for their efforts at providing some  basic infrastructure for the town, urging them not to relent.

Thomas was particularly happy about the construction of a police station in the community, saying that this has enhanced security in and around the community.

He also lauded ODA for rehabilitating some roads and for providing boreholes in strategic areas of the community, saying these has brought some improvement to the life of the people.

In his welcome address, the President of ODA, Chief Femi Oloruntoba said over N4 million was spent on the execution of  some community projects  in Ogidi during the outgoing year.

He said that the money spent on the projects was through donations by individuals and ODA branches in Lagos, Ibadan, Abuja, Kaduna, Lokoja and other parts of the country.

The President listed the projects executed in 2022 to restoration of electricity back to Ileteju area after about six months blackout  include renovation of classrooms, part funding of building of a laboratory for Ogidi Community Secondary School, lensing support to projects initiated by other development associations , provision of electric transformers , grading of Kabba -Ogidi road, purchase of two motorcycles and furniture for Ogidi Police Station.

Oloruntoba said funding has been a major challenge facing ODA, saying that  association required the support of the indigenes and their friends to execute about 10 developmental projects in 2023.

The President then called for support and generous donations from individuals and ODA branches across the country towards the realisation of the projects.

In his response, Chief Peter Arogundade, also an illustrious son of Ogidi pledged a donation of N5million on behalf of the Lagos branch of ODA.

He also appealed to indigenes of Ogidi to rally round the leadership of ODA in its efforts to attract growth and development to the town through provision of basic amenities.

The Peoples Democratic Party (PDP) Candidates for the House of Representatives and state  House of Assembly for Kabba/Ijumu federal constituency and Ijumu state constituency , Mr Olaiya Olobatoke and Mr Babatunde Olupeka were among dignitaries that graced the event.

Both Olobatoke and Olupeka donated N200,000 each to ODA towards the execution of its 2023 projects.

Highlight of the ODA 2022 annual general meeting was the donation of textbooks to the libraries of two secondary schools and four primary schools in Ogidi Community and special prayers and declaration of special blessings for the community led by the Bishop of Ijumu Anglican Diocese, Bishop Olanrewaju Ojo.