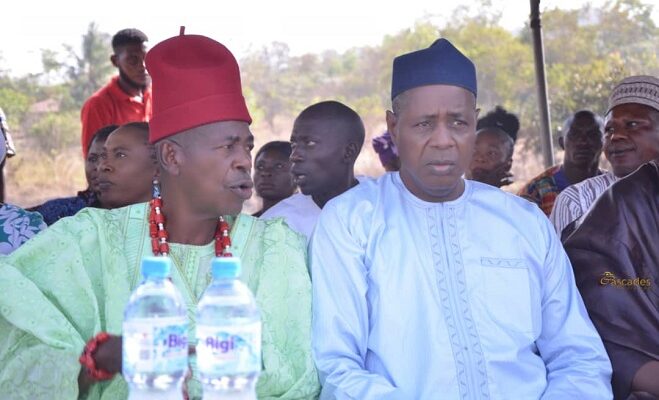 The State Security Adviser to the Government of Kogi State, Navy Commander Duro Jerry Omodara (rtd) has donated business seed money and trading materials such as grinding machines, sewing machines, generators worth millions of Naira to over 100 persons in the Kabba/Bunu local government area.

He made the donations during his annual empowerment, mobilization programme held on Monday, 26th December at the open field in Oke-Offin town in Kogi State.

In a chat with newsmen, Comdr Jerry Omodara expressed hopes that the items distributed will help improve the socio-economic status of not just the beneficiaries and their dependants but also commercial activities in the area. He disclosed that the gesture was a way to give back to the society that has been supportive of the Yahaya Bello led administration.

Comdr Omodara urged the beneficiaries to make judicious use of the items and cash received while imploring them to elect All Progressives Congress candidates across Kogi West to ensure continuity of the good governance in security, infrastructure and other community development.

Addressing the gathering, the representative of the State Governor, Yahaya Bello, the Executive Chairman of Okehi, Hon.Abdulraheem Ozovehe Ohiare said Comdr Jerry is one of the best ambassadors of Yahaya Bello, as his philanthropic gestures and professional acumen continue to distinguish him. The governor further noted that the empowerment program was a clear demonstration of his good intention towards his people.

The APC flagbearer, Kogi West Senatorial District, Hon Sunday Karimi commended Comdr Omodara for his efforts at improving the lives of the people of his community, saying that the government alone cannot do the job, and efforts from individuals like this will help reduce the rates of unemployment in the State.

Speaking with journalists, a beneficiary, Sule Salihu representing the Ebira community in Oke-Offin who received a 220-240V generating set appreciated the kind gesture of the security adviser for lighting up their community.

He also commended his past efforts and goodwill to the community in general. “We all call him uncle Jerry because he has been a source of hope and help to us all,” he said.

Another beneficiary, Mrs Oloruntoba Jumoke said she was not expecting to receive a sewing machine, and she lacked words to describe the joy the gift has brought to her. She appreciated Comdr Omodara for being a source of hope for her and the Oke-Offin community.

Comdr Omodara received 39 defectors who are chieftains of the major opposition party the PDP and others.

The highpoint of the decamping session was the presentation of brooms which represented their public defection from their respective former political parties and adoption of the All Progressives Congress as their new party.