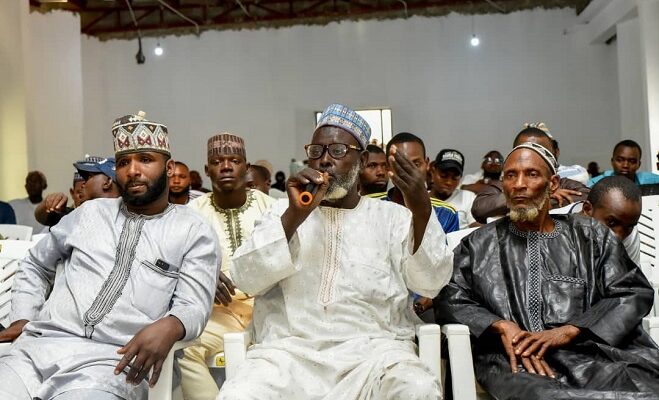 …as Natasha promises to drill boreholes, include children of Hausa/Fulani community in payment of WAEC fees

Ahead of the 2023 senatorial election, the Hausa/Fulani Community in Kogi Central senatorial district has declared their support for the Peoples Democratic Party (PDP) candidate, Barr. Natasha Akpoti-Uduaghan.

The community of Hausa/Fulani in Kogi Central led by the various heads in the five local government areas declared their support for Natasha, adding that they are ready to work sincerely for her victory.

The spokesman of the group, Nasiru Danladi said they were at the residence of the PDP senatorial candidate to declare their support for her because they believed she will attend to their plight.

“We will start the door to door campaign any moment from now and reach out to our people in various local government areas to vote for you in the senatorial election.

“We are known for sincerity and we’ve made our point known today and we are ready to work for you.

“We are not here because of money, we are after our dignity and respect and we have declared to work for you because of the love you have for humanity,” Mall. Danladi said.

Barr. Natasha Akpoti promised to drill boreholes for the Hausa/Fulani community and in their settlements to ameliorate the plight of water scarcity faced by them.

The PDP senatorial candidate also promised to include the children of Hausa/Fulani community in the payment of WAEC fees of students in Kogi central senatorial district, adding that she will ensure the Haus/Fulani community have electricity, access road and good hospitals when she gets to the Senate.