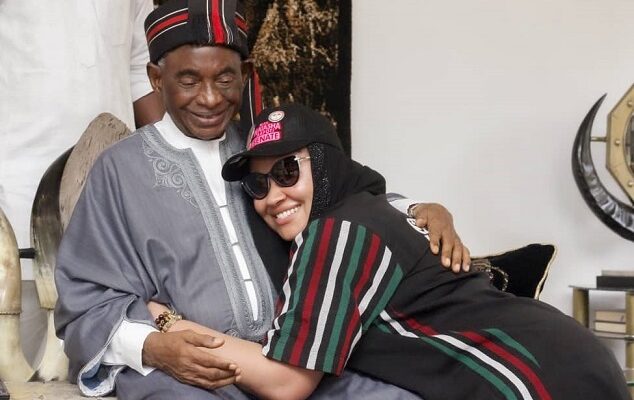 The Ohinoyi who described Barr. Natasaha as a precious gift to Ebiraland said the people need more of her type to speak for the people and portray Ebiraland in good light.

“Natasha is a gift to us Ebira people, my dear people, I want to thank you for the support you are giving her, she will succeed Insha Allah.

“My dear respectful citizens, I present to you my daughter, Natasha Akpoti-Uduaghan.

“She knows what she wants and when to get it. Go and take care of her as the only female in the contest. I am proud of her and want to have more of her in Ebiraland,” the monarch said.

“What you are doing is for good, I won’t respect anybody who is not doing the right thing,

“President Muhammadu Buhari is a personal friend of mine, he has been in this house before, I respect him so much and he respects me.

“My mission and fulfillment is to have more of Natasha in Ebiraland for the whole nation to know who we are. I know what you went through to build your image. Thank you so much for coming,” the Ohinoyi concluded.

The Queen of Ebiraland and wife of the Ohinoyi, Hajia Funmilayo, who was also present to receive the PDP Senatorial candidate, said she is happy more women are rising up to take up leadership responsibility.

The Queen who prayed for Barr. Natasha to achieve her goal, also charged her to be a good ambassador of Ebira people and portray the land in good light when she gets to the Red chamber.

Appreciating the support given to her, Barr. Natasha promised to be a voice to the people of Kogi Central and ensure she join hands with other lawmakers to fight for the revival of Ajaokuta steel company amongst other things to the land.

She called on the people to vote rightly in the senatorial election to secure the future and improve the standard of living in the land.

“My fellow candidates and myself on the platform of PDP will tour all the five Local Government Areas in Kogi Central, down to the ward level, our campaigns are going to be strictly issued-based. We call on the ruling party to allow for peace to reign.

“There is no need to fight your sisters and brothers, let peace reign. I know that you have been promised so many things, count on us that are the PDP candidates, trust us with your votes and we will deliver to you once we get into office.

“Look at the manifestos of all candidates and choose who will give you jobs not guns, it’s your right and your decision to choose your leaders. Vote those who you can entrust with your future and I hope, you will vote for me and other PDP candidates,” Natasha said.