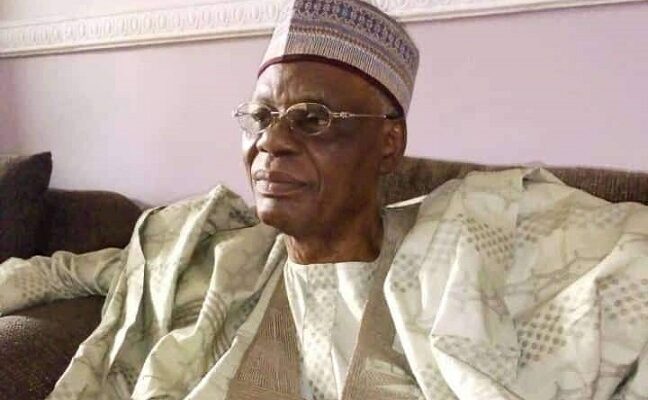 A hot afternoon on December 2, 2022 it was, after returning from the Friday Jumat service, lying down to re-energies myself from the harsh weather embrace. I heard my dad speaking on phone, it turned out to be an emotional call. There, I was listening and became impatient as to who and what’s the content of the call, seeing my dad becoming emotional. I was calm, patiently waiting for my dad to hang up the call in other to know the content of it. My eyes hurriedly gazed and fixed on his direction to be ushered in as what was making him emotional, after the end of the call. My dad said pen-chant “a threshold of the foundation of Ajaokuta Politics has been cut off; Death has kissed and take hold of the many big ideas.” Alhaji Adama Ahmed Samari is dead.

I was shocked and confused at the same time, as my bones and body become feeble. My eyes hurriedly become cold, my hands tied beyond movement, my mouth widely opened. My heart became a race on its own, my memory rushed back in million ways, front and back, my sight become blur, all these appeared instantly as to the demise of a strong personality in Ajaokuta Local Government.

My dad, Momoh Ismaila Attah, started hurriedly narrating the good works done by the late sage to me who is keen and interested in his tributary. I became fascinated and astonished from the narration given to me, as I was not opportuned to meet and see him physically, but his good action speaks volume which can make me understand the many personality Ajaokuta brethren will miss.

This is a death for mourning, it hurts too deeply down to the bone marrow. We can’t imagine that a day like this would come so quickly, but here we are, mourning one of the greatest men to have ever bestrode the soil of Ajaoukuta in Kogi state and Nigeria at large.

I was barely four years when the Late Alhaji Adama Ahmad Samari became the Federal House of Representative member representing Ajaokuta constituency under the All People’s Party (APP) in 1999. An astute entrepreneur and a business mogul who embraced everyone without an iota of doubt or trying to dampen someone, but he sees everyone with a unique view. He shared his cheerful face of laughter to one and all, that brighten someone darkest hour.

His articulated and well organized sense of loyalty to his friends is beyond mere reasoning. He would readily available to extend the warm hands of help to friends and acquaintances, without minding what he goes through, be it favourable or not.

A leader without borders and statesman without frontiers. He is someone to reckoned with, who never forgot those who helped him. An astute humanitarian and a lover of the people, he did a lot of charity away from public glare and public praises. A man who always take joy in helping everyone and anyone. He was a Man of faith, a Man of his words, a Man that always stand for the truth, a personality worth emulating. A man of loving character without the outward display of religiosity. The late polyglot took passion in speaking so many languages which has at every time brings favour to him. He is a multi-tasker and risk-taker, who is a gentle and a mild spoken person with his gently movement in ease. A man he was, driven by passion and clear vision in creating jobs for his people.

The late Adama was a foundation to reason with when it comes to Ajaokuta politics. He represented wisdom with calmness. Indeed, his humility is second to none, his character is widely seen, his love for unity stood him out. This is a reflection from his utterances. A shaker and mover of politicians of all round, grooming the younger generation to be committed and useful to the societal development. Unlike many Nigerian elder statesmen, Late Adama’s political journey was modest, and true to the core. His profile is not filled with government positions and appointed portfolios.

From the onset, he was indeed a hero and role model for all generations. He understood society quite well, who felt pain faced by his people. He was vast with the 14 wards in Ajaokuta, he acknowledges its rot and the task required to fix it. He preached peace, love, justice, and tranquility to all, which could serve as a riding track upon which everyone should sail. The late Adama was only concerned with the future of the Ajaokuta youths and Nigeria at large, and how they could be reformed, in other to shape and change their community. He was an inspiration to the youth and always advised everyone on the need to maintain peace, law, and order. He never looked down on anyone, whose love for the masses is beyond present reality.

Late Adama was a man of the people who believed that governance ought to be an arena of joy, happiness and true merriment, that political differences ought to be managed in order to pursue the greater good of communal growth. The People’s General of whom the people chant his praises in far and near. A selfless leader he was, whose magnanimity and administrative acumen would be greatly missed.

Good men must die, but death cannot kill and eradicate their name. The only truly dead are those who have been forgotten. Late Adama Ahmad Samari can never be forgotten. You are placed in our hearts in a high esteem.