The disagreement between 36-year-old Mohammed Adamu and his elder sister, Ikani Ayebe Adamu, which had sim­mered since 2014, finally boiled over, resulting in Mohammed strangling her to death.

Mohammed is now gnashing his teeth in regret, in the custody of the Kogi State Police Com­mand, under the watchful eyes of men of the State Criminal Investigation Department, where he is undergoing interrogation.

Bad blood between the sib­lings developed over the plantain planted in their father’s com­pound.

Long before Mohammed strangled the sister, Sunday Sun gathered that he had sev­erally threatened to kill her and burn her house over her refusal to allow him harvest the plantain planted in their father’s com­pound.

The deceased, Ikani, was the first among nine children of the family, which hailed from Adumu Igah village, Olamaboro Local Government Area, Kogi State. Four of the children died later, prior to the recent demise of Ikani.

The Kogi State Commission­er of Police, Emmanuel Ojukwu, who spoke with Sunday Sun expressed shock at the horrifying death of the deceased.

One of the children of the deceased, Onaja Adamu who recounted the chain of events that led to the death of the mother said: “My uncle, Mo­hammed Adamu came to our house around 4pm to inquire about the where­abouts of my mother. I told him that my mother went to the farm to har­vest cassava stem.

“He left and came back around 6:00pm to ask about my mother again. I still told him that my mother had not yet come back. We became suspicious of why he was insistent on knowing the whereabouts of my mother. So we traced our mother to the farm and saw her dead body around 8:00pm, lying by the side of the road; her wheelbar­row also stood beside her.”

In a chat with Sunday Sun, the Deputy Commissioner of Po­lice, in-charge of the State Crim­inal Investigation Department, Lokoja, Mr. Ibrahim Sambo, said that detectives were drafted to investigate the circumstances that led to the death of Ikani. In the course of the investigation, the detectives arrested Moham­med as the prime suspect.

During interrogation, he con­fessed to the crime and narrated how he killed his elder sister.

Sambo said that the autop­sy report confirmed that the deceased was strangled to death. He added that the suspect would soon be charged to court. 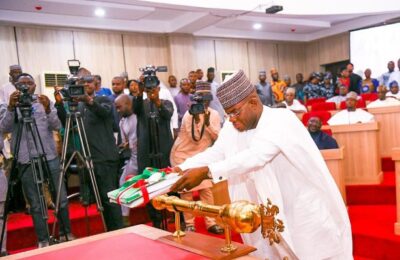