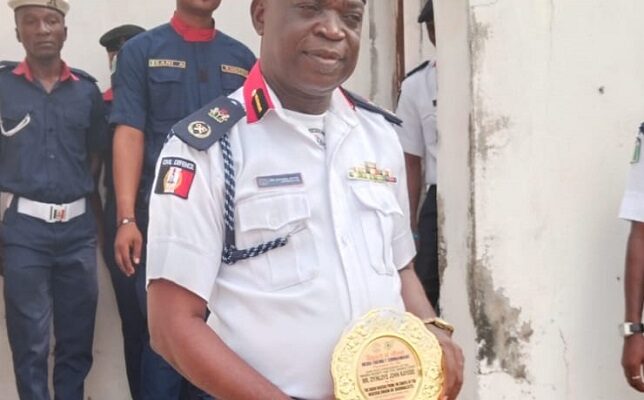 Conferring the Award on the Commandant, the Chairman, Radio Nigeria Prime FM Chapel of the Nigeria Union of Journalists (NUJ) Lokoja, Comrade Olusegun Oyenibi said the award was conferred on him following careful observation of his activities since he assumed office in Kogi State.

According to him, the Commandant had used his professional expertise to nip crime and criminality in the bud, pointing out that the Award is merited and well deserved.

He rated the officers and men of the Command high in the Area of Civilian relationship, discipline and public conduct as they have  also demonstrated high sense of diligence in the discharge of their official duties.

The Chairman assured of continued partnership of the Radio Station with the Command particularly projecting their activities to the world.

Responding, the Commandant, Mr. Oyinloye John Kayode, while thanking the Media outfit for the recognition, said the honour will spur him to do more for the State and nation at large.

Mr. Kayode reiterated his determination to leave the State safer and better than he met it, saying NSCDC will continue to provide support that will ensure that criminals are chased out of the  State.

He used the occasion to congratulate the Federal Radio Corporation of Nigeria (FRCN) on the recent Award as the Best Radio on balance reportage of the year by the Nigeria Media Award.

The Commandant added that he has used his office to bring lasting solution to all challenges facing the Cooperative Society of the Command as well reposition the Command for optimum performance.

He disclosed that a joint security outfit is being put together by Security agencies in the State to permanently keep criminals out of the State.

The NSCDC Boss commended the unflinching support of Governor Yahaya Bello to the command and security agencies in the State which he stressed has made the fight against crimes and criminality successful.