Home News Kogi Central: ‘LAPO Will Soon be a Thing of the Past’, Ohere Assures Women 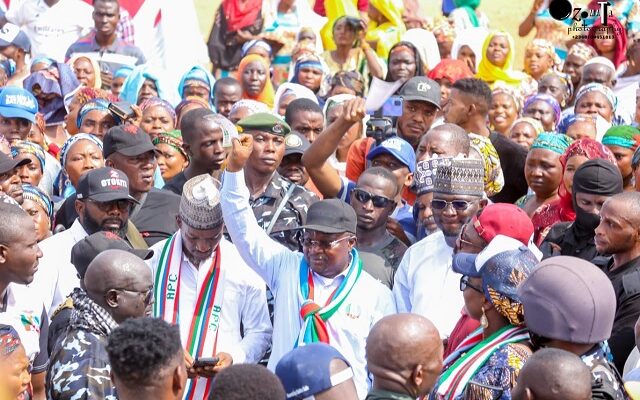 Kogi Central: ‘LAPO Will Soon be a Thing of the Past’, Ohere Assures Women

The Kogi Central senatorial candidate of All Progressive Congress (APC), Engr. Abubakar Sadiku Ohere has promised to facilitate business grants for the women and youths in the area if elected as Senator.

He made this known while addressing the crowd at the campaign rally organized by Ohere Political Vanguard (OPV) in Okene on Saturday.

He assured the women, who are members of over 89 thrift associations in Kogi Central senatorial district, that the era of queuing and begging microfinance firms for unfavourable loans will soon be over.

He reiterated his willingness to actualize his campaign promise of cushioning the economic hardship faced by the women and youths and promised to facilitate and “embark on robust grant empowerment for our women so as to put a final stop to the continuous patronage of LAPO by our women.”

Engr. Ohere expressed his joy over the action by the Asuvopengwu Women Association, adding that he has never witnessed such a display of love, especially that the rally was neither prompted nor induced monetarily.

He said credit be given to Governor Yahaya Adoza Bello who has done so much for the state.

The campaign rally organized by OPV in collaboration with Asuvopengwu Women Associations was attended by hundreds of women from over eighty-nine groups of thrift contributors.

The women said they decided to organize this event to demonstrate their support for Engr. Abubakar Sadiku Ohere. They expressed their satisfaction with the senatorial candidate for his tremendous support for women of Kogi Central, most especially the thrift contributors over the years.

The coordinator of the Asuvopengwu Women Association, Hajiya Sefinat Yusuf Ateiza, reiterated their readiness to vote massively for Engr. Abubakar Sadiku Ohere and all APC candidates in the forthcoming election.

“We have gathered here today to reassure His Excellency Alhaji Yahaya Adoza Bello of our support for him and also in appreciation for his selfless service and support for our women. We will vote for Engr Abubakar Sadiku Ohere, Hon. Tijani Mohammed Oliver (TOA) and all other APC candidates in the coming elections.

“Our permanent voters cards are intact,” she said.