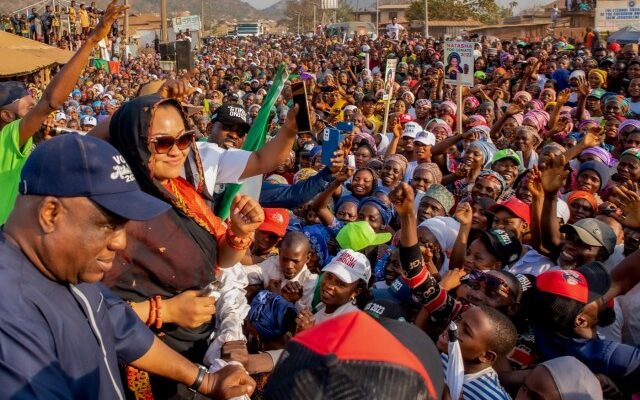 Natasha’s campaign train was given overwhelming support with the mass defection of the chieftains of All Progressives Congress (APC) into PDP.

The decampees from APC were led into PDP by the former Kogi State Commissioner for Agriculture, Hon. Suleiman Enesi who declared his support for the senatorial ambition of Natasha and other PDP candidates.

The PDP senatorial candidate was received by mammoth crowd who declared their support and readiness to vote for her and other candidates of the party.

Natasha called on the good people of Kogi Central not to shortchange themselves of the opportunity to correct the mistakes of the past, adding that she cannot afford to fail her people when she gets to the Senate.

The Senate candidate noted that she will continue to advocate for the revival of the Ajaokuta steel company when she becomes the Senator of Kogi Central.

“We have NIOMCO in our local government which hosts the iron ore, even though we have advocated for the revival of Ajoakuta steel company, each time we have spoken for Ajaokuta steel, we have also campaigned for Itakpe iron ore which will boost the economy and livelihood of the people when it starts working.

“I plead with you all to pick your PVCs and turn out in your numbers in your various polling units and vote for PDP, don’t sell your vote, don’t let anyone intimidate you.

“You all have suffered enough, channel all your energy, and all the pains you’ve endured to vote for me and other PDP candidates to change our story.

“We will work hard to bring development, we will bring lots of jobs, and I hope to celebrate with you on the 25th of February 2023”, she said.

Natasha also promised to be the most vibrant, competent, and charismatic Senator, adding that she wouldn’t seatback and see projects going to other zones without fighting for her people.

Natasha Akpoti-Uduaghan Campaign Organization described the mass exodus of APC chieftains into PDP in Kogi Central as an affirmation of the readiness of the people to chase APC and its failed agents from the seat of power.

The Campaign Organization also noted that the good people of Kogi Central are now ready than ever before to have representatives that can speak for them and represent their interests at the National Assembly and another seat of power.

The Campaign organization boasted that more chieftains of APC will continue to join PDP until Natasha Akpoti-Uduaghan emerge as the next senator of Kogi Central and every other candidate of the party.

Spread the love
Tweet
Previous PostKogi West Senate Race: NNPP Candidate, Bukky Flags Off Campaign in Kabba Next PostKogi Central: 'LAPO Will Soon be a Thing of the Past', Ohere Assures Women