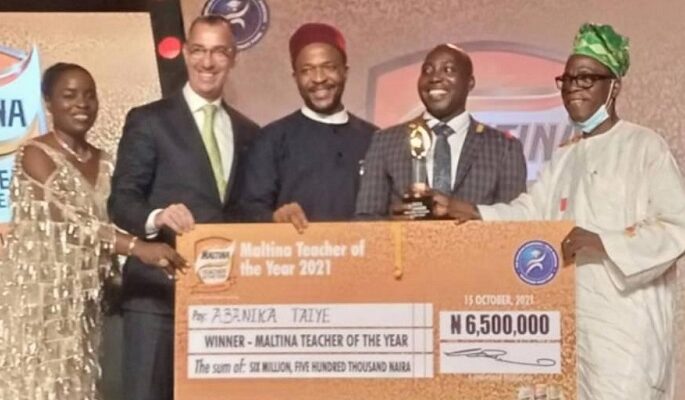 Mr. Abanika Ohiani Taiye, a teacher from James Hope College, Agbor, Delta State, has emerged as the 2021 Maltina Teacher of the Year.

Taiye, from Ajaokuta Local Government Area of Kogi State, received a cash prize of N6.5 million, N1.5million instantly and N1 million annually for the next five years. All from the Nigerian Breweries/Felix Ohiwerei Trust Fund

The father of six will also benefit from an all-expense paid capacity development training abroad while a well equipped computer laboratory or six block of classrooms worth N20 million will be constructed in his school.

Aside the winner, the first and second runner-ups, 16 teachers who emerged as state champions were rewarded with N500,000 cash each. Governors and proprietors of the winning teachers are expected to shower them with additional gifts and even promotions.

Abanika’s teaching career started in his hometown, Ebiya in Ajaokuta Local Government of Kogi State in 1994. He continued teaching during his NYSC period in 1996-July 1997 at Government Secondary School Shendam in Shendam Local Government area of Plateau State.

After the NYSC, he moved to Lagos State. He started teaching as a PTA teacher at Methodist Secondary School, Yaba, between 1997 and 2000. He was missionary teacher in the same school between 2000 and 1996.

“I have passion for human development and growth, happiness in working with children of all ages and seeing them growing in knowledge, skills, critical thinking and problem solving. These are some of the features of vocational aptitudes. Also because teaching is a noble and godly profession.’

“I feel so elated and honoured for being crowned as the Maltina Teacher of the Year. I put in a great effort towards all I have done in the competition and I hoped and prayed to win. But you know man wishes to be somewhere but God takes one to the right destination at the right time.

“Though, the good news just got exposed some few hours ago. And very few of my fellow teachers have heard and they were glad and sent their congratulations. As for school and students, I am not sure they are aware yet. But I am sure they will express happiness and gratitude when the news gets to their door steps,” Abanika said.

Since its inception in 2015, teachers have been receiving their rewards on earth as against the old saying that their rewards are in heaven.

Stakeholders acknowledged the contributions of Nigerian teachers to producing the needed power for the economy. They called for constant recognition, rewards and provision of improved welfare.