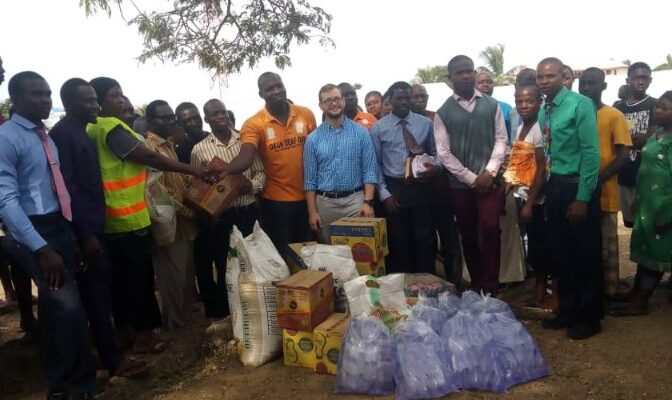 The Independent Baptist Church of Lokoja, has donated relief materials to the victims of flood disaster at Internally Displaced Persons (IDPs) in Lokoja, Kogi.

Speaking to newsmen at IDP camp in Gadumo Primary school Lokoja, the Church Pastor, Akinwunmi Olabiyi, said the Ministry was into helping people in need especially those affected by natural disaster.

He expressed the delight of the Church in ministering to the material need of the victims and also preaching the Gospel of Jesus Christ to them.

”We are very happy to have actually been able to sympathise and reach out to these victims of flood disaster.

”We are happy that God has used us to be a blessing to the victims both materially and spiritually. Our message is that there is hope for them even after this flood.

”We pray that God will give our governments the wisdom to know what do to mitigate this annual flood disaster.

”We believe that if the government can do their part, this flood can actually be controlled,” Olabiyi said.

He said that the Independent Baptist Church is also partnering with the School for the Deaf which is an arm of the Christian Mission For the Deaf Church.

Also speaking, Pastor Abiodun Anifowose of the Christian Mission for the Deaf Church, said they came to sympathise with the flood victims and also share the word of God with them.

He noted that the ministry had also visited other IDP camps in the state to donate relief items and also preached the Gospel to them.

Mr Isiaka Zacchaeous, who spoke on behalf of the victims, appreciated the Church for the gesture, and called on other organisations to emulate the ministry.

He urged the government to come to their aid in providing basic amenities as well as relief materials to alleviate their suffering in the camp.

The items donted include: rice, noodles, spaghetti detergents, among others.