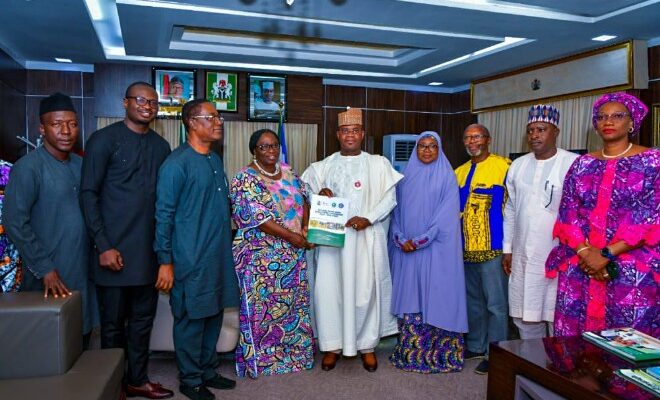 Governor Yahaya Bello of Kogi State, has restated the continuous support of his administration for the Value Chain Development Programme (VCDP) to boost agriculture and ensure food security in the state.

The VCDP is a Federal Government program supported by the International Fund for Agricultural Development (FGN/IFAD-VCDP) to sustainably enhance rural incomes and food security.

Bello gave the assurance on Thursday, when the IFAD Country Director, Ms. Dede Ekoue, led a delegation on a courtesy visit to the Government House, Lokoja,

The governor noted that Kogi used to be called a ‘civil service’ state in spite its agrarian endowment, saying his administration had turned it into agriculture friendly and the real food basket of the nation.

Bello appreciated the team for the value the IFAD-VCDP activities was adding to the farmers and agricultural produce in the state.

He commended the State Programme Coordinator (SPC), Dr Stella Adejoh, for her tenacity and doggedness in always achieving results.

”We are hoping that we will be able to support them greatly using every resources that are available to us.

”Our own commitment would not fall short in terms of counterpart funding and every other thing that you will require to support IFAD,” Bello said.

He stressed that agriculture remained the highest employer of labour in the country, assuring that his government would continue to take full benefit of it.

He assured that the government and good people of Kogi, would continue to partner with IFAD to ensure that the citizens have full benefit of its endowed resources.

The governor commended President Muhammadu Buhari for what his administration had been doing for the country in terms of agriculture.

Earlier, the IFAD Country Director, Ms. Dede Ekoue, said the team were in the state for a Mid-Term Review (MTR) of IFAD-VCDP activities being implemented in nine States including Kogi.

According to her, the objective is to access all the progress made, look critically at challenges to be addressed, and opportunities to further leverage on to scale up the impacts.

”We want to do our work based on evidence which shows that youths are priority for Kogi State. We salute your dedication to gender equality as well as youth inclusion in Kogi.

”Your feedback is critical and we want to count on that to improve. We already known that your leadership had been instrumental for the results that we have achieved in Kogi and we want it to be sustained,,’ she said.

Ekoue thanked the state government for all the support given to VCDP activities in the state, especially the prompt payment of its counterpart funding, and hoped it continued.

The country director sympathised with the government and people of Kogi over the recent flood disaster that ravaged the state.

She noted that IFAD-VCDP was already given its support to farmers who were victims in the state through the distribution of farm inputs to boost dry season farming activities.

In his vote of thanks, the State Commissioner for Agriculture, Mr David Apeh, said the government always take seriously all donor supported project in the state.

Apeh noted that the partnership with VCDP had resulted in boosting food security, enhanced economic growth and improved the wellbeing of farmers in the state.

Earlier, the State Programme Coordinator (SPC), Dr Stella Adejoh, thanked the governor for his commitment to fully supporting the VCDP activities in the state. She equally thanked all the Mid-Term Review Team members stating that she is Ready to learn from the visiting team for effective and efficient Programme implementation in the State.