Home News FG Begins Disbursement of Cash Grant to Over 3400 Vulnerable Groups, Others in Kogi 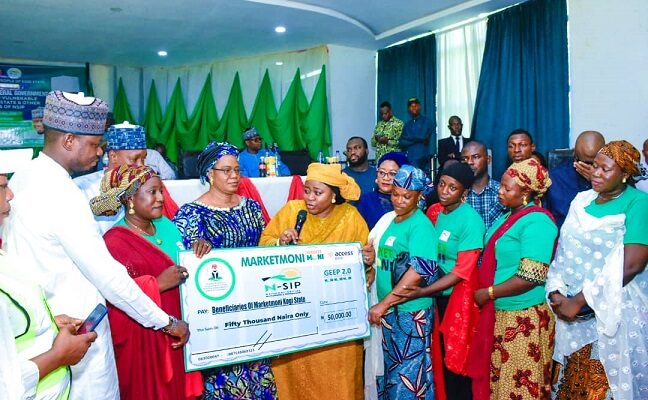 FG Begins Disbursement of Cash Grant to Over 3400 Vulnerable Groups, Others in Kogi

The Federal Government through the Ministry of Humanitarian Affairs, Disaster Management and Social Development, has commenced the disbursement of N20,000 cash grant to 3,415 vulnerable groups (GVG) in Kogi State.

The Minister, Hajia Sadiya Farouq, who inaugurated the disbursement on Tuesday in Lokoja, said other beneficiaries under the National Social Investment Programmes (NSIP) would also get their various package.

She said the NSIP remained a project that is consistent with the deliberate National agenda of President Muhammadu Buhari, to lifting 100 million Nigerians out of poverty by 2030.

She said the GVG was designed to provide a one-off cash grant of N20,000 to some of the poorest and most vulnerable Nigerians in the rural and peri-urban areas to ease them out of poverty.

The Minister, who was represented by the Director of Special Duties in the Ministry, Mrs Nadia Soso-Muhammed, said their target was to disburse the grant to 3,415 beneficiaries across the 21 local government areas of Kogi.

She noted that President Buhari through his deliberate social inclusion agenda, had directed that 70 per cent of the beneficiaries should be women, and 30 per cent youths.

She added that 15 per cent of the total beneficiaries would be allocated to the people with special needs and the senior citizens.

She explained that the GEEP 2.0, was in three categories: Trader-moni, Market-moni and Farmer-moni, in which beneficiaries would get loans ranging from 50,000 to N300,000 with zero interest depending on the category.

She stressed that the GEEP 2.0 was designed for the vulnerable and low-income Nigerians involved in commercial activity and capacity but never had opportunity to access loans.

She said about 1,142,783 potential beneficiaries had been registered across the 774 LGAs in Nigeria out of which 50,394 were from Kogi.

She added 14,404 out of the 50,394 registered in Kogi had been verified out of which about 3, 437 were enumerated and selected for payment in the first phase.

She commended Governor Yahaya Bello for his immense contribution and commitment which had ensured the great success the NSIP had recorded in Kogi.

Farouq urged all beneficiaries of the various programmes to use the grant and the loans to improve their productivity, create wealth, employment, and improve their living standard.

In his remarks, the Governor thanked the President and the Minister for all the various intervention programmes that the federal government had put in place for Kogi people and Nigeria at large.

The governor, who was represented by the Head of Service, Mrs Hannah Odiyo, thanked the Ministry for identifying with the people of Kogi during the flood disaster that ravaged the state.

He noted that aside partnering with the federal government on NSIP, he established healthcare programme, known as ”Bello Care Programme” which had been taken care of the health needs of the vulnerable citizens of the state free of charge.

The governor said that as ‘a pace setter’ he remained committed and not relent in setting the pace for others to follow in all aspects of the economy.

He urged the federal government to do everything within its power to make Kogi a disaster resilient state, so that it could withstand the incessant flood disasters.

Onyekehi, who doubles as the Special Adviser to the Governor on Special Projects, said a total of 353,768 beneficiaries had directly and indirectly benefitted from the NSIP in Kogi State.

The focal person added that about 200,000 public schools’ pupils are currently benefitting in the school feeding programme with the engagement of 3000 cooks in the state.

He further said that over 74,000 poor and vulnerable citizens are  beneficiaries of the conditional cash transfer who are receiving N10,000 bi-monthly, aimed at eradicating poverty in the state.

He, therefore appreciated the President, the Minister and the Governor for the laudable programmes.

The News Agency of Nigeria (NAN) reports that the representatives of the minister and the governor presented the cash grant and other items to the various beneficiaries based on their categories.

Mr Ibrahim Arome, the Chairman of Persons with Disability in Kogi, who spoke on behalf of the beneficiaries, thanked the the President, the Minister, the Governor and the focal person for the gesture.

Arome specially thanked the governor for the practical inclusion of persons with disability in the state, saying they have been involved directly in all the intervention programmes.