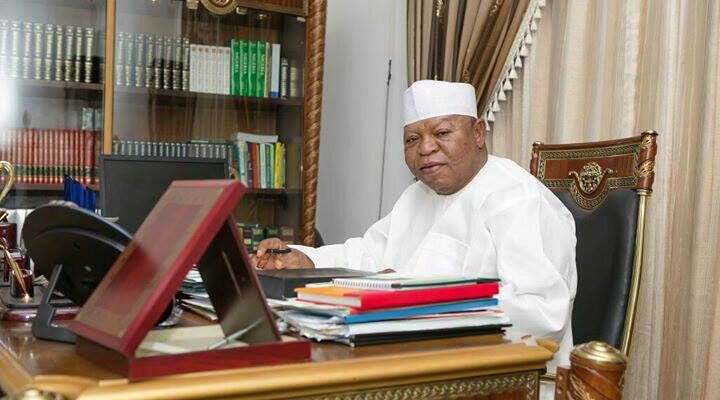 Going down the memory lane, seven years ago, there was the hope of many loyalists and supporters who labored reverently from dawn to dusk to ensure that the people of Kogi state are salvaged from hunger and poverty-stricken reality. This hope of the common man was dashed irretrievably through the cold hands of death.

The late Prince Abubakar Audu’s death trailed his final exit which started and caused a lot of controversies in the state and Nigeria at large, seven years ago.

The late Audu, an undisputed leader of the Igala race and a colossus, was regarded by many as the most known politician from the area.

As his followers mark seven years after his demise, Prince Abubakar Audu’s evergreen developmental strides that enhanced the state comes to mind and how his sudden death truncated much imminent progress that would have upgraded the state beyond present reality.

Many of his supporters helped out of their possessions in financing the campaigns with the hope that they would be compensated with a favour or an appointment. His demise brought down all hope and expectation as many of them termed it as a monumental loss.

During the time of his death, the newspaper and television becomes a holy ground that supporters turned to for information and answer ground for a way towards the resurrection of Adoja. Rumour mongers spread the heated news, then, that late Audu had resurrected from the dead, which made many youths danced in and out of Ogbonicha to celebrate the news. Unfortunately, the rumours turned out to be false and Prince Audu was laid to rest according to Islamic rites on 22 November 2015.

Late Audu was born on 27th October 1947 into the family of His Royal Highness, late Pa Audu Oyidi, Orego Attah of Igalaland and the Paramount Ruler of Ogbonicha–Alloma in Ofu Local Government Area of Kogi State. Prince of Ogbonicha, fondly called Adoja (servant of the people), had some critics as to what politics present, while many opposed him, others revere him passionately. He was unarguably an enigma who rode Kogi state politics like a true Hero.

Prince Audu began his career as a junior worker with First Bank and with hard work, attracted the likeness of his boss who put him on promotion to officer’s cadre in no time. Late Audu proceeded to London between 1975 and 1978 for studies in Banking and Personnel Management, obtaining professional qualification as a Certified Secretary. Late Audu spent 25 years in First Bank, formerly Standard Bank, where he distinguished himself with selfless service in different capacities at the managerial level. He broke the record with his appointment as the first black senior management staff of Standard Chartered Bank of London and New York as well as being the highest-paid black man in the bank in both the United Kingdom and the United States of America (USA). He later returned to First Bank as General Manager and was appointed Executive Director of FSB International Bank Plc before he was drafted into the world of politics.

Late Audu’s rich credentials soon fascinated the government of the old Benue State in 1986, which appointed him Commissioner for Finance and Economic Planning.

Every day is significant which is an offshoot of tomorrow’s today, the late Adoja was a passionate leader that has the interest of the common man in his heart. During his tenure as a Governor, many infrastructures were constructed that brought a lot of development in the state like roads, construction of dilapidated schools, hospitals, hotels among all other viable and feasible constructions.

While as an undergraduate at Kogi State University, I set my eyes on every project constructed by the Late Audu which made me to realized and be impressed to see his evergreen projects compared to others in other states. All his projects in the state had a unique touch of high standards which still stand tall in the state today. He chose a most beautiful site for the state university, a former agric project office, which he rapidly built up with more facilities. However, his larger-than-life ego was also on display. When he was criticized for naming the state university after himself, he pointed out that Ahmadu Bello University was also named after its founder.

Another remarkable achievement of the late Audu was the hospital he built in his hometown, Ogbonicha which he named after his father, late Audu Oyigi Memorial Eye Hospital.

Late Audu had recorded many firsts in his political life; he was the first executive Governor of the State when he won the election in November 1991 on the platform of the National Republican Convention (NRC). He was subsequently sworn in, in January 1992. Audu’s government was to run for 22 months after which the military terminated the administration. He, however, recorded monumental achievements within the period, especially in the area of roads, education, housing, electricity and healthcare services, among others. and later on the platform of the All Peoples Party (APP) in 1999. He was synonymous with opposition politics until the APC won the 2015 election. When democracy was re-introduced in 1999, Audu, was with the All Peoples Party (APP), was elected again with over 700,000 votes and was sworn in on 29 May 1999 as the 2nd Executive Governor of the state.

A fearless and astute leader, Audu’s demise confused the state, the electoral commission and in the legal environment, where reputable and senior advocates argued the circumstance of the 2015 gubernatorial election in Kogi state.

The likes of Late Abubakar Audu is rare to come by. But let me say to the young people of Kogi State, you can make your life reflect his personality by making him happy in his present abode.

Previous PostYahaya Bello’s Awaited Yuletide Hamper for Onukaba Adinoyi-Ojo Next PostFG Begins Disbursement of Cash Grant to Over 3400 Vulnerable Groups, Others in Kogi