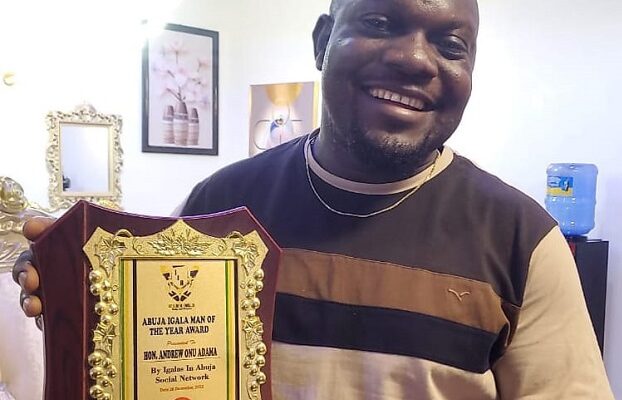 A sociocultural organization under the auspices of Igalas in Abuja has recognized the tremendous developmental inputs of their kinsman, Engr Andrew Adama, a Business Tycoon resident in Nigeria’s capital city.

Presenting the award, the Public Relations Officer (PRO) of the forum, Comrade Arome Martins highlighted the numerous humanitarian gestures of the trailblazer which he noted is full of emulative qualities.

He also recognized the uncommon humanitarian interventions of Adama hinting that he has written his name in gold devoid of sentiments.

According to the spokesman, “Adama has proven over the years to be a torchbearer ameliorating the plights of the masses including the widows and the downtrodden without any political motive.

“This is an uncommon approach to curb the ugliest menace of poverty in the society. He deserve a lot of accolades but in reality, he is poised to do more without seeking any trace of thanksgiving”.

He encouraged the recipient not to relent in his passion to wipe away the tears of the poor masses while urging him to further extend his tentacles to the grassroot.

In his remarks, Engr Adama, a renowned realtor residing in Abuja thanked his kinsmen for finding him worthy for the rare honour.

He pledged his unalloyed loyalty to improve the welfare of his people especially his immediate constituency without sentiments, fear or favour.

He said “let me reiterate clearly that my intervention to better the plights of our people is not anchored on the fact that I deserve to be recognized with any Award. It is my passion to see people succeed in life without strive, stress or begging.

“I strongly believe my mission here on earth is to help those who are in need. I don’t need the camera to capture any show of generosity from my end because giving is a biblical injunction and I will continue to do this till the end of my sojourn on earth because God is involved.

“I pledge to do more because I strongly believe that through giving, we receive”.

Engr Adama emerged the recipient of this year’s award beating other nominees in a keenly processed online poll.

The Igala Man of the Year Award is an annual honour bestowed on distinguished personality who have contributed their quota during the year in review.

Adama who is from the Eastern flank of Kogi state has been described in many quarters as a “silent achiever”.