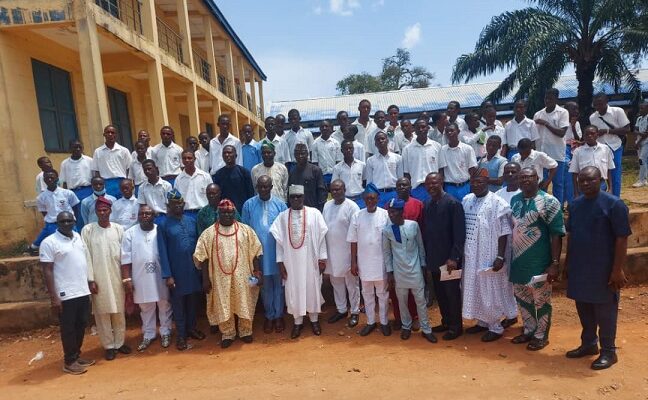 The 1982 set of St. Augustine’s College, Kabba, Kogi State, on Saturday, came together to honour their past teachers and donate projects to their Alma mata.

The colourful event marked the 40th anniversary of the 1982 set’s graduation from the prestigious College.

The occasion which brought all the students, teachers and friends of the school together was used to hand over various projects donated by the 1982 set to the college.

Some of their old teachers and school staff some of who are currently in their 90s were honoured with cash rewards.

In his address, the Chairman of the Planning Committee, Prof Jide Jimoh of the Department of Mass Communication, Lagos State University, said in recognition of the monumental efforts of the College to make them who they are in their various fields of endeavours, they all agreed to give back to their alma-mata.

He noted that though some of them were not able to attend the event because they are scattered across the globe, that did not stop them from contributing to the success of the projects, stressing that it is a known fact that government alone can no longer provide for the educational sector in the country hence their intervention to appreciate the college.

He commended the management of the college for their continuous efforts to carry on the vision of the founding fathers of raising future leaders through the institution.

Aside from the donations, they also have career lectures for the senior students of the college on selected topics.

Delivering a lecture on entrepreneurial development, the former Managing Director of Daily Trust Newspaper Limited and the Akogun of Ife-Olukotun, HRH Akogun Isiaq Ajibola said Alhaji Aliko Dangote, the Chairman of Dangote Group, started small with #500,000 given to him by his uncle, even though that was good money that time, it was not more than what some Nigerians were taking abroad for holiday. Aliko followed up his dreams diligently and today the company has grown into a conglomerate around the globe.

He said entrepreneurship is one of the best sectors they can think of in life and narrated how he and some of his colleagues decided to set up Daily Trust Newspaper having realized sometimes ago that all the national dailies in Nigeria then have their headquarters in Lagos and they decided to set up their own in Kaduna to cover the northern parts of the country and today the newspaper is the most popular and acceptable medium in not only the Northern Nigeria but the entire country.

He encouraged them to take their studies serious and pursue their dreams with all seriousness to achieve greatness in life.

He said cultism is a secret society that has become a serious challenge due to the unwholesome activities across tertiary institutions in Nigeria, stressing that the topic is apt for the students to be equipped with the understanding of why they should not toll the path of joining any cult group while they proceed for their post-secondary education and in life generally.

He said the origin of campus cults in Nigeria can be traced to 1952 when Professor Wole Soyinka, winner of the Noble prize for literature and a group of six friends formed the Pirates Confraternity Elite at the University of Ibadan and London respectively, it is not good considering the activities of those cult groups which may shatter their beautiful dreams in life, hence he advised them to desist from joining any.

He said they can excel on campus and be intellectually sound without belonging to any cult group.

Professor Jide Jimoh, in his presentation, lectured the students on how to become a professional Journalist.

He said the media remains one of the key sectors that hold society together, because it is an act of gathering, and preparing information to disseminate same to the public, pointing out that information is power.

He encouraged the students to take much interest in reading their books as that is the only way they can pass their exams because they will have the right information for any questions in their exams.

Earlier in his welcome address, the Principal of the College, Mr Femi Emmanuel Abolusoro who is also an Old Boy, commended the 1982 set for the initiative to give back to their alma-mata.

He stressed further that this will be the first time since he assumed office as the Head of the school that any of his senior set in the college is coming to do something tangible for the progress and development of the prestigious college.

According to him, he cannot thank them enough as their act of benevolence will assist the college in getting many things done effortlessly.

In his thank you message, the Head Boy of the College, Comrade Enimola Samuel used the occasion to eulogise the kind gesture of the 82 sets, urging them and other old boys not to forget the college, as there is a need for more infrastructural developments like hostels, classrooms and principal quarters in the college.

Highlights of the event were the handing over of 60 double seater student desks, donated 300 textbooks in English,  Mathematics and Business Studies to the school Library and JSS1 – SS3,  5 teacher’s chairs and tables, 4hp Mower and presentation of cash gifts to some of their past teachers, non-teaching staff and some of their classmates that are late.