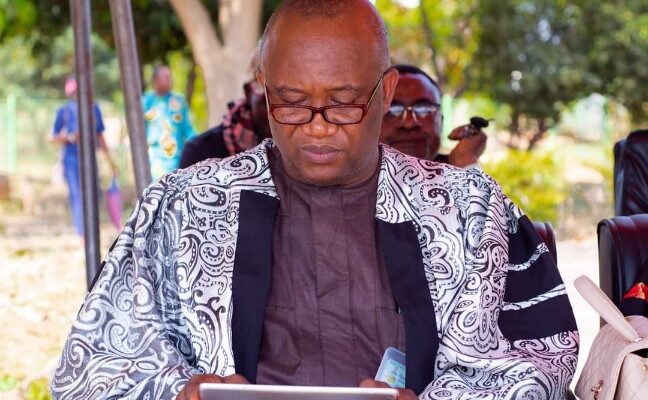 He came in, unassuming but with high expectations. His coming is telling; in fact, he is needed at a time like this. Staff and students and of the Nigerian – Korean Friendship Institute (NFKI) can testify to the fact that he is the one needed at the time he came in. They all heaved a sigh of relief the very day of his first meeting with them.

The institution is a place that needed an administrator, a director, a conductor, a salesman, a motivator, a moulder, a tutor, and trailblazer. They found that and even more in the new Rector who showed that where there is a will, there will certainly be a way. So, from the stables of Doctor Usman Ogbo, who incidentally shares the same compound with him at Kogi State Polytechnic, Williams Charles Oluwatoyin came in and rolled up his sleeves almost immediately to kick-start the process of revamping the institution. His intention is for the learning institute to be above board, a feet he is achieving without much hurrah!

I can remember him telling the staff in his first meeting that he would operate an open door policy literally. That has come to fruition with many realising that he is the simplest and the most approachable Rector they have ever had. His approach to issues – taking and working with pieces of advice that have worked for him and helped him push the institute to a high pedestal.

It was a hush news and then it became something expected by some when it broke September 9th, 2022 about his appointment as Rector. It became clearer between the 10th and 11th when many friends and admirers began to congratulate him in the public and then he assumed office on the 13th. Settling down to work, he had to make sure he was on the same page with everyone.

He got assurances and has worked with many to see that he achieved his set objectives in the institute.

The NFKI is one of the most equipped technology institutions in Nigeria. Go and verify. The school has some of the state-of-the-art technological equipment that when put to use, can lift the state and the country high up beyond everyone’s imagination. It was therefore surprising to get there and see a few under 50 students studying across the departments before his assumption of office, with staff looking demotivated and largely beteft of ideas as nosedived morale steer one in the face as you enter the gates of the institute.

Some of them told the new Rector in their first open meeting that they needed someone with the ability to lead them positively, beyond the politics of administration. Dr Williams Olueatoyin gave them his words to take the place from the level it was to a higher pedestal. The last matriculation, third in the history of the school, confirmed that. The institute matriculated 151 students from the various programmes being run.

This is happening barely three months in the saddle. New programmes, including distant learning programmes have been introduced to encourage people from all parts of the country to come and learn in the school.

Science, Technology, Engineering and Mathematics (STEM) leads the way globally. In fact, no society can achieve meaningful growth without STEM, but what makes it different in NFKI is the vocational approach to education. Vacation is key in many developed societies today, as countries like Canada, United States of America, United Kingdom and others are practically scouting for gifted hands in various aspects of human endeavours, especially in STEM, to encourage into becoming citizens of their countries. This is because such talents are needed in ensuring continuation in their technological growth and advancement in other fields of human endeavour.

Some of the best brains in such countries are either immigrants or children of immigrants from Africa, Asia, parts of Latin America and the likes because of the quality they possess. Mr Williams Charles sees all of these and that is why he has taken it upon himself to market the institution to the public so that people can take opportunity to acquire technological and entrepreneurial skills for the growth of Kogi State and Nigeria at large.

Having this understanding, the Rector told his staff to own the institution and market it to the public. It was sad that with the state-of-the-art facility they have, there was still a low patronage by students and parents when in fact, the school is capable of training the best students in underwater and surface welding and fabrication, electrical and electronic engineering, computer software engineering, computer networking and system security, plumbing and fitting, among others.

This is now history under the leadership of the new Rector who has made it a duty to bring to bear his experience in the multimedia world by ensuring informatic graphics are designed to inform and educate the public about the programmes obtainable in the institute.

We look forward to many more months and years of growth for NFKI under the leadership of Dr Williams Charles Oluwatoyin.