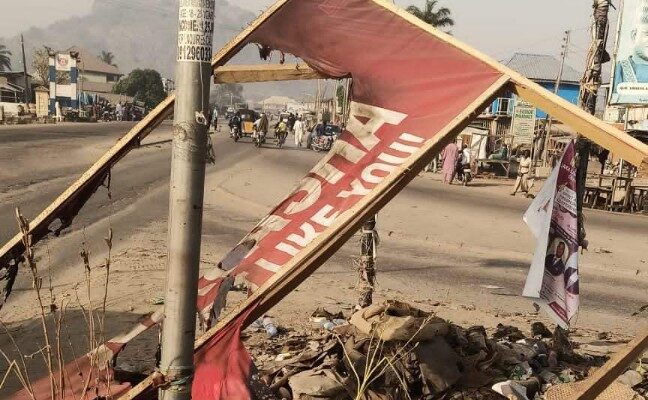 Hoodlums suspected to be loyal to the ruling APC in Kogi State have allegedly destroyed the campaign billboards of the Kogi Central Senatorial candidate of the Peoples Democratic Party (PDP), Natasha Akpoti-Uduaghan, in some local government areas.

Kogi State government had asked the PDP and other political parties in the state to pay millions of naira before their candidates could be allowed to paste posters or distribute flyers.

In a letter dated October 24 and addressed to the PDP chairman in the state, Engr. Sam Uhuotu, the government demanded the payment of the fund within 14 days.

However, despite the payment by Natasha, her campaign billboards across five local government areas were destroyed by hoodlums suspected to be loyal to the Kogi chapter of APC.

“Even though Natasha Akpoti Uduaghan paid N11.2 million to the Kogi state government as signage fee, her billboards across five local governments were destroyed by All Progressives Congress’ thugs allegedly working for the APC,” a source said.

“This was carried out in Okene and Adavi local government areas in particular.”

The suspected thugs had earlier attacked the campaign train of Barr. Natasha in Lafia, Okene LGA on December 4, 2022, during her homecoming.