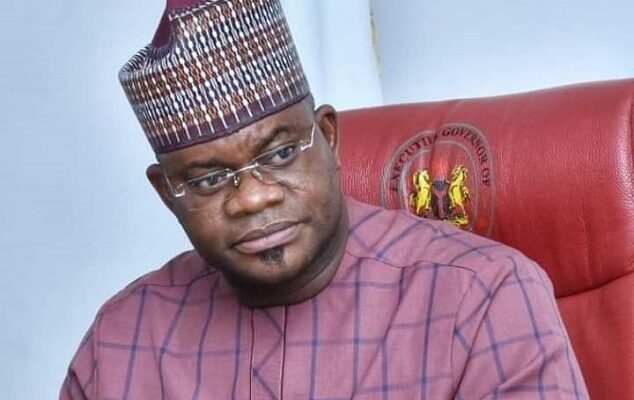 Why I Detained Ohi of Eganyi – Gov. Yahaya Bello Speaks

Governor Yahaya Bello on Tuesday highlighted the major reason why he had the paramount ruler of Ajaokuta and Ohi of Eganyi, HRH Alh. Musa Isah Achuja suspended and detained.

Recall that following the killing of eight security operatives in Ajaokuta Local Government Area of the state, Governor Bello issued out a query on the Chairman of the Local Government, and the paramount ruler arrested.

In a security meeting with Heads of security agencies, Chairmen of Local Government Areas and paramount traditional rulers, Governor Bello explained why he had the Eganyi Monarch in detention and refused bail.

Bello said prior the attack, he had received security intelligence reports which indicted the Monarch, and he cautioned him.

“Before that very ugly incident, I do receive intelligence and reports from the locals and from various sources, and I did call the Local Government Chairman of Ajaokuta and the paramount ruler of Ajaokuta, particularly the Ohi of Ajaokuta. Reports reaching me from your domain is not palatable, he said.

Bello said he was not going to let anybody stain the success he has recorded in securing the state.

“Therefore if your area is going to stain that record, we in government will not take that lightly with you, and I particularly called these two gentlemen because the Chairman reported that particular traditional ruler to me severally about his activities and his involvements with some elements whose activities are questionable in that particular local government.

“So I couldn’t bear it your Royal Majesties, I went straight to that Ohi and I cautioned him that this is the last warning. He will pay dearly for any other crime, and mandated him to get rid of all the criminals around. And all he could do is to turn it political, change the whole story as if it’s a clannish issue,” he said.
The Governor then caution against attempts to bail the Monarch out of detention.
“Therefore, that particular traditional ruler will pay dearly for it. Nobody should ever harbour a criminal. Criminals are useless anytime, and there’s no reason whatsoever by anybody to take to act of criminality.
“Anybody that comes for the bail of that traditional ruler, arrest him and charge him with the same offence. If the person is above you, let me know and I will overturn him at Abuja there. That person will know that he has a date or fight with me,” Bello instructed the Commissioner of Police, Edward Egbuka.

He gave the traditional rulers and local government Chairmen one month to cleanse the land.

He said if the Ajaokuta Local Government Chairman’s response to his query is not satisfactory, he will lose the job, urging the rest of the Chairmen to seat up.