Home News Opinion: The Enfant Terrible Has Landed in Kogi 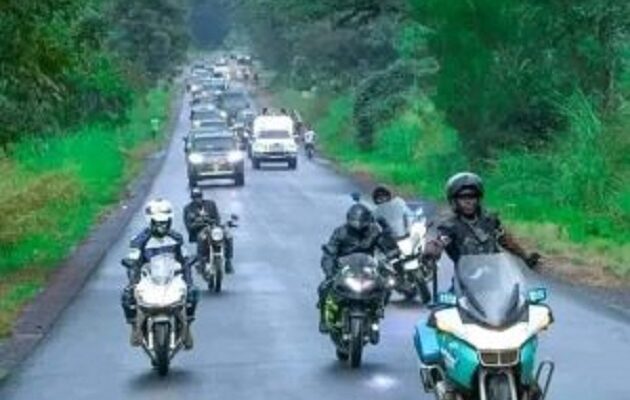 Opinion: The Enfant Terrible Has Landed in Kogi

It was a colossal defeat. After so much noise and elaborated hoaxes, Emperor Yahaya Bello achieved just 47 votes. The show was likened to a brigand, and the dance was equated to that of a macabre dance.

Even the 64 delegates from Kogi deserted him. The latest dancer, Mrs Folashade (secretary to the state government) and her co entertainers went into hiding. Where are the Nigerian celebrities? Those who have never heard of Kogi but found their ways to the state because a sumptuous dinner table awaited them. In the mean time, we shall open history books. Only then shall I be constrained to throw questions to you all.

My mouth is opened in utter disbelief. Sanity is plunged abyss and those still living with their conscience are confused— an audacity to be right at all time is seemingly a crime. After frittering tax payers’ money on a trip of vanity, Yahaya Bello arrived Kogi state in convoy.

It looks like a hide-out celebratory backslappings akin to a successful bank robbery. His co democratic rapists in company of our sleeping lawmaker stood on Abuja-Lokoja road under a shaddy weather waiting for the emperor’s arrival.

Does that baffle you? It shouldn’t. Because the mandate to lead in the present Kogi is not given by the people but by the governor alone. He decides who get what. This is the latest update about our long standing democracy. It is constricted by men of flawed characters and amorality.

At last, GYB2PYB was a charade, its potent enabler I heard had been abandoned somewhere. However, those who extorted the idea from him and sold it to Yahaya Bello are some 2023 daylight dreamers whose aim had been achieved halfway. It was a distractive attempt to gain control ahead of next year’s  general election. But guess what? It will end up a futile attempt. Even those salivating his name upon his arrival are profiteers of unclean proceeds of political business, none of them genuinely loved him.

Yahaya Bello has dealt with Kogites in such an awkward manner that we would never pray for an Bello again, never! Affliction shall not arise the second time. He may have oppressed us by denying the civil servants a sense of entitlement and turned Kogi to his private establishment, Nigerians would never stoop so low to that overbearing young lad.

As it stands, Kogi state is so sunk in debt. Anyone nursing the ambition of becoming a governor just to loot may have to look else where. The state is messed up. What the governor has borrowed in less than 8 years has doubled what his entire predecessors borrowed for 16 years. Even some genuine ideas which informed their borrowing were not accomplished, except Ganaja flyover which funds narrowly escaped diversion. Worst still, other governors created processes and employed best hands, Yahaya Bello recruited e-minion (Data boys). Other presidential aspirants wooed delegates, Yahaya Bello slept on TV stations. He sponsored mouth watering adverts and treated Nigeria’s celebrities to Kingsley dinners. As if election is won on National TV or with the high-heap-over-size breast-flaunting side-chicks called celebrities, Yahaya Bello mocked sanity and stressed his Luck.

For all who cares, the only opportunity that lies get to travel round is when truth is wearing shoes. The truth about Yahaya Bello’s imprimatur signature—security is glaring. Kogi is now haven to all manner of insecurities. From kidnapping to cultism, killing, robbery and stealing, Itobe-Ajaokuta-Okene road is no longer safe. These days, the fear of commuters is no longer about road accidents, it is the fear of been kidnapped or even raped and maimed in the process. We now live with suicide bombers as the ancient city of Kabba is now a den of all manner of bomb explosions. How did we get here? Yahaya Bello’s sycophantic invitation of Fulani herders for cattle ranching was the architect of the daily gory figures. We appeal to the next government to reverse that order. There is so much to bear at the moment. People are dying, blood flows on our streets, misery and despair in our eyes. The thought of not seeing our loved ones makes life a living hell.

Bye and large, the enfant terrible has returned to his business venture. Politicking has begun to the detriment of overwhelming populace. What’s next? Those unscrupulous delegates who refused to vote their own had crossed the red line. They should all go into hiding. If not, dead threat is inevitable. Likely, unity list may be filtered to ensure wolves like Smart Adeyemi don’t reap where they did not sow. Is Kogi Central senatorial district seat waiting for the emperor? Well, he might fool himself thinking Tinubu would consider him for a ministerial position. But when the time comes he would understand that by dragging presidential ticket with the lord of Budillon, he has taken impunity too far. He has bitten the fingers that fed him. In short, all those who wanted Jagaban off the way, Vice president Yemi Osibanjo inclusive, should be prepared for Ambode’s ordeal— story for another day!

Who else saw the way primary election was conducted for APC prospective candidates? The criteria was not about what aspirants could offer. Once you’ve been anointed, the rest follows. If you like, be a ward councillor, without your name on “UNITY LIST” you’re going no where. This time around, the emperor doesn’t need you, you need him, and even more. That is why OLAMABORO high chief struggles to glue his legs in a government he murdered sanity to install.

Two months since the presidential brouhaha, nobody heard about workers’ salary. You may be so shocked that, despite been paid in percentage, their payments suffer delays as a result of the primaries.

Weep no more. The night is far spent, the dawn is here. May the mistake of yesterday never be repeated. See you again!

I have spoken. Kill me and wait for more to rise. The rod of justice is unstoppable.