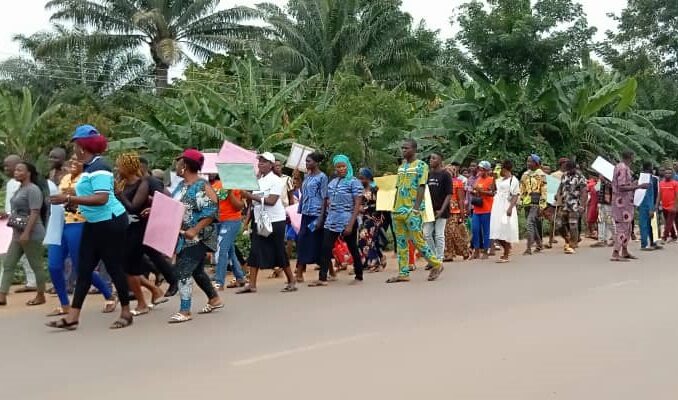 A day after youths staged a protest in communities hosting Dangote Cement Company over the firm’s alleged lack of commitment to the area, more protesters trooped out in Ijumu local government area of Kogi state on Wednesday.

The protesters protested in Iyara expressed their displeasure towards Dangote Group over what they termed ill attitude towards the Kogi state government and it citizens.

They commended Governor Yahaya Bello for his bravery in challenging the richest man in Africa.

They urged the state government not to renege on the promise made to Kogites that the resources of the state will work for it people.

The protesters said the the current face-off between Dangote Group and Kogi state government is “a battle for reclamation.”

According to the protesters, Dangote Group has done more damage than good to the people of the Kogi state.

“He polluted lands, trailers killing our people everyday and caused erosion as a result of mining activities that has wrecked huge havoc and endangered peoples lives.

They vowed to continue the protest until justice is served to the people of Kogi state.

The Executive Chairman of Ijumu LGA, Alhaji Taufiq Isa who received the protesters assured them of justice and fairness from the Governor Bello.

He informed them that the battle to reclaim Obajana cement company from Dangote Group as a battle of no retreat, no surrender, regardless of the level of intimidation and harassment.

He said history will be kind to the protesters as they are fighting for the majority.