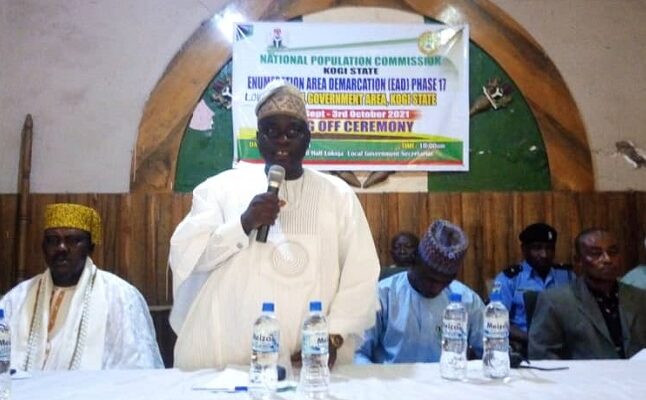 The National Population Commission (NPC) has solicited the cooperation of the relevant stakeholders as it commences the Enumeration Area Demarcation (EAD) Phase 17, in Lokoja Local Government Area of Kogi State.

The Federal Commissioner, NPC Kogi State, Prof. Jimoh Isah, at the inauguration on Wednesday in Lokoja, appealed to residents and relevant stakeholders to cooperate with the enumerators to ensure hitch-free exercise.

According to him, the EAD is the division of the country into small areas that can be conveniently covered by a pair of enumeration during the census period.

Isah, who was represented by the State Coordinator of NPC, Mr Abiodun Ojo, said the EAD started in Kogi in 2016 in Ogori-Mangogo LGA, saying the enumerators have been moving from one LGA to another, and Lokoja LGA would be the final phase in the state.

He stressed that the EAD exercise would provide solid foundation for the next national population and housing census, adding that the commission had been engaging with the key relevant stakeholders.

He urged the stakeholders to carry the message to the grassroots on the need for everybody to cooperate and support the exercise.

He explained that Lokoja LGA, was coming in the final phase of the EAD exercise because of its peculiarity and as the state capital with diverse ethnic nationalities.

He noted that the EAD which was officially inaugurated today, had started in Lokoja on September 6, and would end on October 3, 2021.

He noted that the reports the NPC was getting from enumerators on the field, showed that there were challenges of people not given them access to their houses especially public offices.

He, therefore solicited for the cooperation of the traditional rulers, religious and community leaders, residents to ensure a hith-free exercise.

He urged the local government chairman, royal fathers, politicians, and the security agencies to help ensure the safety of the enumerators during the exercise.

He further appealed to the Lokoja LGA chairman to assist in the areas of accommodation and logistics for the convenience of the enumerators.

The federal commissioner enjoined the enumerators to put in their best and ensure that the desired results were achieved.

The Chairman of Lokoja LGA, Mr Mohammed Dansabe, who was represented by his Chief of Staff, Mr Abdulkareem Abdullahi, assured the NPC of the council’s cooperation and support.

Dansabe, who flagged off the EAD exercise, appealed to the royal fathers and the community heads to give the necessary support to the enumerators and ensure that residents give them the right information.

The chairman commended the efforts of the federal commissioner and assured that the council would do the needful to assist the enumerators based on the fund available at their disposal.

His Royal Highness (HRH) Engr Idowu Senibi, the Bajana of Obajana, Lokoja, who spoke on behalf of the traditional rulers, appreciated the NPC for the exercise, saying it was coming at the right time.

Senibi explained that Lokoja remained a historic local government because it was the historic capital of Nigeria, and urged the federal government to give adequate attention to the development of the ancient city.

He assured that the royal fathers would called on their ancestors to ensure the safety of the enumerators for a successful exercise.

”The traditional rulers are fully prepared to support the LG Chairman for the success of the EAD exercise by the NPC”, the monarch said.

Stakeholders at the EAD flag off include: the Police, traditional rulers, community leaders, Oworo Development Association, women and youth leaders, among others.