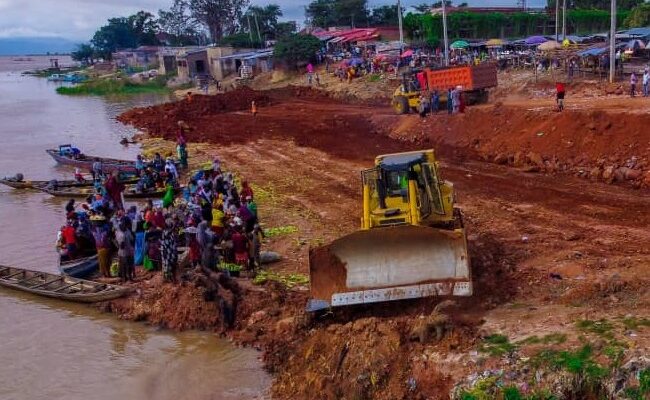 It is no longer news that the major effects of climate change, flooding has ravaged many communities in Kogi State. Since 2012, attempts at mitigating this major effect has not been yielding the desired impact.

Contracts awarded in this regard were merely addressing symptoms instead of treatment. Therefore it was a jubilant mode yesterday when the Governor Yahaya Bello contractor, Ceezali Nig. Limited was remobilized to site to commence the abandoned embankment work of the marine road through Kpata market Lokoja to provide protection for the state capital against the flooding threat.

The State Commissioner for Works and Housing, Engr. Abubakar Ohere FNSE, flagged off the construction work in company of his counterpart in Environment Ministry, Chief Victor Omofaye.

Engr Ohere commended the political will of His Excellency Alhaji Yahaya Bello and described his proactive consciousness as unprecedented. The project is fully funded by the state government and is expected to progress steadily to completion.

Engr. Ohere also stressed that, “Government had equally embarked on massive de-silting of drains, clearing of culverts with identification of black spots, We will continue to reap the gains of planning, as the flood control measures in the state had been stepped up to contain any unforeseen weather condition, adding that relevant measures had been put in place to mitigate  any unforeseen circumstances.”