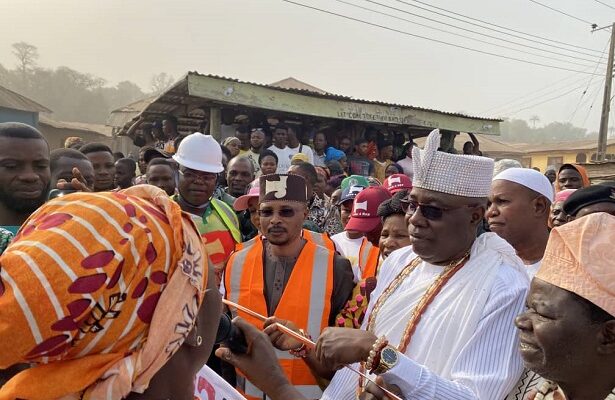 Member Representing Yagba Federal Constituency in the national assembly, Elder Leke Abejide at the weekend flagged off the construction of Ejuku, Makutu, Irunda-Ile, and Odo-Amu roads which have been in deplorable states and impeding economic activities in the areas.

“Today’s event is remarkable not just for me personally, but for the people of Yagba who will directly benefit from these projects. The flag-off of these projects is the beginning of the much-needed relief I am bringing to our people on this axis.

“We are here today to fulfill the promise we made during the campaign. These promises are now being translated into reality because we have the construction and rehabilitation of these roads. We have ensured that we deploy competent and reliable contractors to design and deliver the projects”

Hon. Leke Abejide described Makutu as a critical component of the Yagba East and Isanlu, assuring residents of the communities that he remained committed to reviving infrastructure in Yagba Federal Constituency.

“Irunda-Ile is critical to our agenda towards delivering the people of the community from the long dilapidated road network being experienced in the area. This is why I created the time to come and flag off these projects,” Hon. Leke said.

Abejide said the projects were not being done to score cheap political points; rather, he said his representation considered them as the right of the people who had been longing to benefit from the dividends of governance, although he has been giving to the communities, especially to the widows and also lighting up the communities.

He further said the situation of Makutu road has barred many market women from going to the market in neighboring towns around Isanlu community.

Although, some of the roads, would be in phases, as Hon. Abejide assured that the project would not delay the construction of the second phase, but would create a chain of opportunities for residents living around the sites and linking them to other communities without stress.

Chief Dare Olatunde, the Maiyegun of Isanlu Kingdom, said Hon. Leke Abejide meant well for the people of Yagba and he should be supported for another term.

He also stated that the road projects will bring relief to the residents, as the projects would also eliminate the problem of flooding and bad roads on the axis and improve the social-economic wellbeing of the people.

“When Hon. Abejide looked at what is obtainable, he almost postponed the work, while considering that he said the rehabilitation has to start, then, he decided to flag off the construction of these roads, so that our people will enjoy the dividends of good governance and many more.

“These projects are being carried out to improve road connectivity, ease accessibility, reduce travel time, enhance transportation services and safety of lives and property.

“They will be designed to eliminate perennial flooding, enhance property value and socio-economic wellbeing of the people,” Maiyegun said.

He appealed to the residents to cooperate with the contractors and be patient as work progresses on the projects, noting that there would be inconveniences in some axis, especially for the people who have cashew farms and houses close to the construction area during the construction exercise.

Accompanied by his supporters, and massive followers, Hon. Leke Abejide was massively received by the people of the communities, singing, dancing, and eulogizing the member for delivering dividends of democracy and also doing more for the people as member of the House of Representatives.

The traditional rulers of the communities appreciated Hon. Leke Abejide.