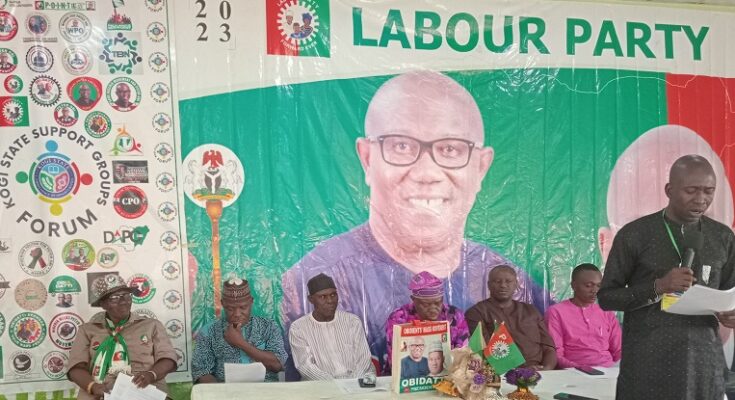 Various groups supporting the presidential candidate of Labour Party (LP), Mr. Peter Obi, in Kogi state has vowed to work hard to win at the polls.

The forum of support groups in Kogi state formally initiated a ’45-days marathon mobilization’ for Peter Obi with a promise to sensitize electorate in all polling units, wards and local governments in the state.

Speaking at the ‘Obidient Summit’ held in Lokoja, Kogi state capital, on Saturday, a member of the Presidential Campaign Council, High Chief Femi Ajisafe, said he is convinced beyond doubt that Peter Obi has all it takes to make Nigeria a better place.

A farmer and politician, Chief Ajisafe said the Labour Party’s presidential candidate is the most credible among those vying for the nation’s top seat.

“Based on proven capacity and capability of Mr. Peter Obi, I am convinced beyond reasonable doubt that he can move Nigeria to where it should be in the comity of nations and for goodness to return to Nigeria.

“We are taking notes of the activities and misdeeds of those who have ruled us. We recall those who brought guns and helicopters to rig our votes in past elections. We won’t cast our votes for them,” he said.

Dismissing insinuations that Labour Party have no political structures in the state and Nigeria, Chief Ajisafe said the summit is enough to dispel such misconceptions as support groups from all LGAs in the state were in attendance.

“Structures are amorphous. Structure is about people and we are interested in the people. What we are dependent on are the people. Look at this meeting, people came from all 21 LGAs in Kogi state. As many as are here, will go back home with the good news that real change is coming to Nigeria.

“Government is owing all civil servants in Kogi state. They want change. The workers are not happy. Workers are part of our structures as the party is aligned with labour.

With improvements in our electoral system, nobody can manipulate the voting process. All those bragging about wining are hoping they will be able to manipulate the system but they will fail. We are determined to win the presidential election,” he said.

Chairman of Kogi State Support Groups Forum for Obi-Datti, Onoja Jacob, said the electorate are tired of the old order.

He stated that the support groups are ready to double efforts to actualize the presidential aspiration of Peter Obi.

“I am very confident that Peter Obi will garner majority of votes in Kogi state. I am from Ofante in Olamaboro LGA, there, it almost a taboo to paste PDP or APC posters. The people are tired of the old order.

“Labour Party is stronger than other parties in Nigeria. Kogi is for Peter Obi. We will continue to work to actualise this vision,” he said.

Earlier, in his address to the summit, Presidential Campaign Coordinator for Kogi State, Engr Ahiaba Attah, commended the support groups for their commitment and hard work.

“Your choice to support the Obi-Datti ticket is patriotic. Our people are willing to ride on the wings on positive change and transformation, and take their destinies in their hands. Nothing can be more fulfilling.

“No need for inter-group rivalry but let us go into the polls as one united family bound by common vision to save Nigeria. There is a paradigm shift in the Labour Party which is sharp departure from the old order. Let us work with sincerity of purpose.”