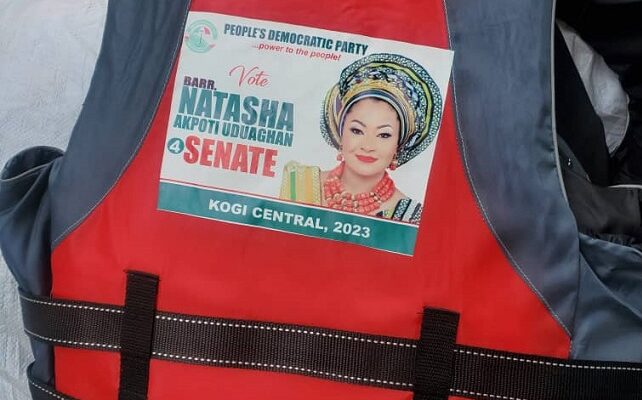 The senatorial candidate of the Peoples Democratic Party (PDP) for Kogi Central, Barr. Natasha Hadiza Akpoti-Uduaghan has donated some life-saving kits to assist flood victims in the state.

The kits were presented to the management committee through the Divisional Police Officer, Ganaja and the Chairman, Flying Boat Association of the affect areas.

The donations, she explained, are part of collaborative effort to manage the devastating flood ravaging Lokoja, Kogi State capital, and Ganaja Village in Ajaokuta local government area and a host of other communities in the state.

Presenting the items which include sleeveless inflatable jackets, the Director-General of the Natasha Akpoti-Uduaghan Campaign Organization, Hon. Abdulrahaman Badamsuiy alongside the PDP House of Assembly Candidates for Ajaokuta and Okene I, Alh. Haruna Ganaja and Hon. Yakubu Azamare respectively, commended the efforts of the flood committee.

They assured the victims of more intervention that will be of relief.

The Flood Management Committee, through the Flying Boat Association Head, thanked Natasha for the gesture and concern shown to the people in their trying time.

“We sincerely appreciate her for this kits and we pray that her dreams come true”.

The Kogi Flood which started late September, 2022, has claimed lives, destroyed thousands of homes and left many motorists and travellers stuck along Kogi-Abuja highway.