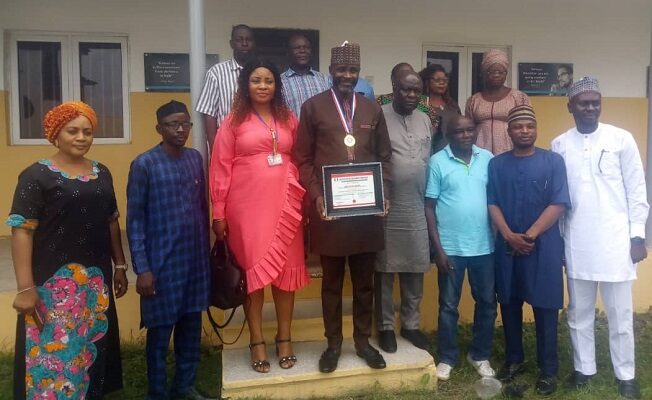 The Kogi State Commissioner for Education, Science and Technology, Hon. Wemi Jones, FCIB, has been honoured with ‘Certificate of Integrity Stewardship award with title ”Service Ambassador” by the Centre for Save and Serve Humanity Organisation (CSSHO).

Presenting the award to the Commissioner on Tuesday in Lokoja, the Executive Director of CSSHO, Mrs Anthonia Aihinoria, eulogised the commissioner for thinking right, acting ethics and serving as advocate of good governance.

She said that the Commissioner had distinguished himself among his colleagues as a silent and great achiever, whose track of indelible achievements had made them proud as an organization.

She explained that from their independent assessment exercise conducted on State MDAs in North Central Nigeria, Kogi State Ministry of Education, Science and Technology, under the stewardship of Wemi Jones, came out very outstanding after the exercise.

”We also gathered with great delight in terms of your performance such as: display of ethical leadership, and developmental policy performance, public accessibility, servicom compliance, commitment to State transformational agenda, attitude against corruption, and obedient to the rule of law.

”Thus, having satisfied with the report of our independent assessment, conducted using opinion polls, questionnaire, interviews with informants and opinion sampling, field assessment, report writing, comment and vote on social media on your activities and performance in our society.

”We are left with no option than proclaiming and inducting you today with the title ”Service Ambassador” and presentation of this award ”Certificate of Integrity Stewardship” for scoring 95% cumulatively in ten sectors of our assessment.

”You are hereby declares ”An outstanding leader in service,” Aihinoria said.

She, however said that the award was expected to spur the Commissioner to do more for his people, and add his voice to the ongoing clarion call to reform Nigeria in the years ahead.

In his response, the Commissioner appreciated the organisation for considering him and the Ministry worthy of the award, saying it was a call for more dedication and hard work.

The Commissioner thanked His Excellency, Governor Yahaya Bello, for given him the privilege to serve his people at the state, and for making education sector his topmost priority.

Jones stressed that the recorded achievements in education sector would not have been possible without the full support of the Governor, as well as the commitment and dedication of the staff and management of the ministry.

He emphasised that the Governor had made education his number one focus thereby increasing the annual budgetary allocation to 30% beyond the 26% UNESCO bench mark for education, hence the tremendous achievements being recorded in the sector.

He stressed that the State Government was focusing more attention on Science, Technology, Engineering and Mathematics (STEM) through the establishment of GYB Model Science Secondary School across the three senatorial districts of the state, as well as establishment of Confluence University of Science and Technology (CUSTECH), Osara.

He said that Kogi State Government under the leadership of Governor Yahaya Bello, had enacted Kogi State Education Law, which the previous Administrations were not able to achieve.

He added that all the tertiary institutions in the state have had all their programmes accredited by their various regulatory bodies, under the able leadership of Gov. Yahaya Bello.

The Commissioner further said that the process of recruiting competent professional teachers for secondary schools in the state were ongoing with due process followed, to ensure that well qualified teachers were engaged.

He assured that many greater achievements would be recorded in the state education sector, saying the Governor was determined and committed to making Kogi the best in education in the Northern States.

In her vote of thanks, Dr Elizabeth Animoku, the Director PRS, on behalf of the Ministry thanked the organisation for considering the Commissioner worthy of the ward, saying the management and staff of the Ministry were very happy.

She described the Commissioner as a true leader that lead by example, and worthy of emulation, while commending the organisation for doing a thorough job.