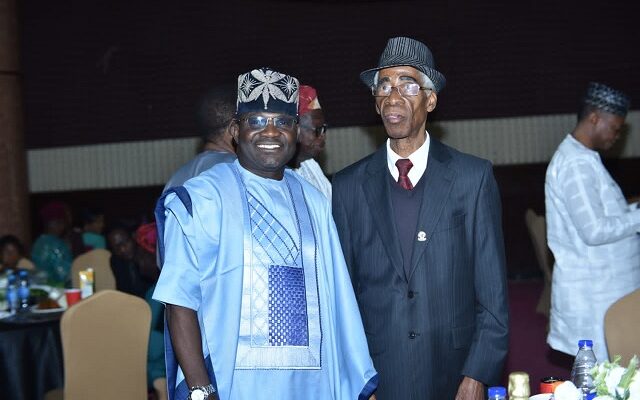 As part of activities to mark the 77th birthday of retired Supreme Court judge, Justice John Afolabi Fabiyi, a detailed biography of the jurist was presented to the public.

The biography was authored by James Bankole Adedoyin, a communications specialist and former permanent secretary in the Kogi state civil service, and Amb. Rufus Bamigbaiye Aiyenigba, national publicity secretary of the Social Democratic Party (SDP) and Chairman, Conference of Spokespersons of Political Parties in Nigeria (CSPaN).

Speaking with newsmen after the public presentation of the biography at a colourful event in Abuja on Friday, Amb. Aiyenigba were inspired to write the book because of Justice Fabiyi’s eminent status, pedigree and contribution to national development.

“Digging into his childhood and upbringing, it is obvious Justice Fabiyi learnt a lot from his industrious parents. His late father was a reputable tailor in his days. In fact, he was life patron of tailors’ association in Ijumu local government area of Kogi state till he went to be with God. His mother was a renowned business woman. His father was a high chief, the Elete of Ekinrin Adde.

“He is the first Okun to become a Supreme Court judge, and second Kogi indigene to achieve the feat.

“It was exciting getting to know more about him, his academic prowess and work ethics. After his HSC in 1966, he was posted to present day Katsina state by the Northern Nigeria government. During his sojourn there as a teacher, the current Governor, Alhaji Aminu Bello Masari was one of his students.

“We were wowed by the interesting and captivating odyssey of his life. The work was quite interesting and impactful for us. We hope the book will serve as an inspiration to our generation and next.

“Justice Fabiyi is an inspiration to us all,” he said.

Chief Bayo Ojo, who chaired the planning committee of the programme, urged public servants in Nigeria to capture their experiences for the benefit of upcoming generations, by writing books.

The reviewer, Prof. Joash Ojo Amupitan, SAN, noted that the biography highlights Fabiyi’s “consistent and unflinching commitment to the pursuit of justice, as against technicalities.”

Amupitan, a professor of law and deputy vice-chancellor of the University of Jos, expressed delight at the privilege of reviewing a book on the revered Fabiyi, who he describes as a “High priest in the temple of justice.”

Amupitan stated that “Nurtured by Grace and Rectitude: Biography of Justice John Afolabi Fabiyi, JSC, CFR, is a complete rendition of the life and accomplishments of a great jurist and a silent philosopher.”

According to Amupitan, Fabiyi “has in his own way, contributed to jurisprudence in Nigeria and nation building.”

Coauthor of Nurtured by Grace and Rectitude, Adedoyin noted that he and his coauthor, Aiyenigba, set out to “write a book on a little known legal colossus.” In the course of data gathering, and at the book launch, however, Adedoyin said they “encountered other legal legends and luminaries.”

Kudirat Motonmori Olatokunbo Kekere-Ekun, a Justice of the Supreme Court, (JSC), represented the Chief Justice of the Federation, (CJN), Olukayode Ariwoola, at the event.

The CJN and indeed justices of the apex court, she said, holds Justice Fabiyi in the highest esteem because of the selflessness, forthrightness and courage which underlined his professionalism and service to the nation.

Fabiyi’s precepts, the CJN noted, remain lampposts for his former colleagues and successor jurists. Justice Okoro Inyang noted that John Fabiyi has remained a patriarchal figure for many of his colleagues, in and out of service, and the minimum tribute to pay to him on the occasions of his birthday, was to endeavour to be physically present. He wished him many happy returns of the milestone.

The celebrant, Justice Fabiyi, expressed gratitude to God, for creating him a human being in the first place, and for taking him through his life’s trajectory.

Fabiyi said his heart was filled with happiness that biographers found his story worthy of serious documentation, apart from articulating a grand ceremony.

He thanked his colleagues in the Supreme Court, the judiciary and the legal profession at large for honouring him with such consideration and affection.

A one-minute silence was observed in memory of Justice Fabiyi’s wife, Christiana Omowumi, who passed on, September 12, 2018, after being married to Fabiyi for 47 years.

Coauthor of Nurtured by Grace and Rectitude, Adedoyin noted that he and his coauthor, Aiyenigba, set out to “write a book on a little known legal colossus.” In the course of data gathering, and at the book launch, however, Adedoyin said they “encountered other legal legends and luminaries.”

Others are Governor of the state, Yahaya Bello, was represented by his attorney general and commissioner for justice, Mohammed Sani Ibrahim, SAN. Royal personages who graced the ceremony included: Oba Solomon Dele Owoniyi, (Obaro of Kabba and Chairman, Okun Traditional Council) and Oba Segun Ayeni, (Olujumu of Ijumu). There were also Oba Anthony Bamigbaiye, (Olu-Adde of Ekinrin-Adde) and his wife, Olori Bridget Fehintola Bamigbaiye Idowu, with Olori Funmilayo Otitoju on the royal delegation from Ekinrin-Adde, Justice Fabiyi’s place of birth.

He began his working life in Kano, at the famous E. Noel Grey and Co Legal Practitioners in the renowned commercial capital of northern Nigeria. He joined the Magisterial Bench of the old Kwara State in 1975. He rose to the position of Chief Registrar of the Kwara State High Court and was appointed Judge of the High Court in 1984. Following the creation of Kogi State in 1991, he moved to the new state as a High Court Judge.

In November 1998, Fabiyi was elevated to the Court of Appeal, becoming Presiding Justice of the Ibadan Division of the Court in 2006. He was appointed a Justice of the Supreme Court of Nigeria March 4, 2009, and retired from service November 25, 2015, having attained the age of 70 stipulated by law.

As Bobagunwa (Adviser-at-Large and Adviser Extraordinary and Plenipotentiary) to the Olu-Adde-in-Council) of Ekinrin-Adde, he keeps an eye on developments in his home community and offers counsel.