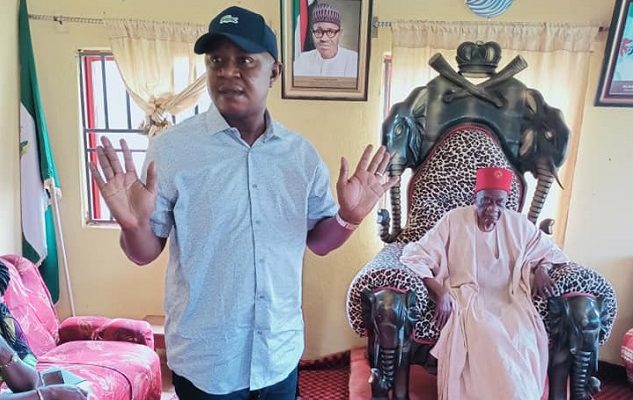 The Executive Chairman of Omala Local Government Council, Hon. Ibrahim Yakubu Aboh has commended traditional rulers in the area for their efforts in tackling crimes in their domains.

Aboh gave the commendation during a security meeting with involving beaded chiefs from across the eleven wards of the area at the palace of Onu-Ife in Abejukolo over the weekend.

The Chairman warned against complacency and ineptitude, saying “no room for laxity in our respective duties”.

“I commend you for all you have done, but I am charging you to do more, put extra efforts in tackling crimes in your domain. We won’t spare any one fueling crisis, no matter your status. Governor Yahaya Bello is a global award winning security Governor, it is a matter of justice, equity and fairness that we uphold this standard to keep Omala Local Government and Kogi State by extension safe and secured,” he said.

Aboh thanked the security agents and all stakeholders for their efforts. He called for collaboration among traditional rulers and their people. He directed them to immediately convene meetings of all community leaders/gagos in their domains, in collaboration with security agents, to identify and fish out bad elements that are fomenting trouble.

Speaking on behalf of DSS, Kogi State Vigilante Service (KSVS), Vigilante Group of Nigeria (VGN) and other security agencies in the area, the Omala Divisional Police Officer (DPO), SP Olubunmi Collins warned all bad elements to vacate the soil, as the law will be interpreted in full to whoever is found guilty of any crime.

He called on every one to volunteer accurate and timely information to security agents to enable them work effectively.

In their separate remarks, the Onu-Ife, HRH Chief Boniface U. Musa; District Head of Ife/Onuh Abejukolo, Chief Suleiman Abimaje and other Chiefs hailed the support they are getting from the council boss. They alluded that there are some elements of bad eggs in the midst of the good ones, and that the time to root them out is now. They declared readiness to put in their best in addressing insecurity in their respective jurisdiction.