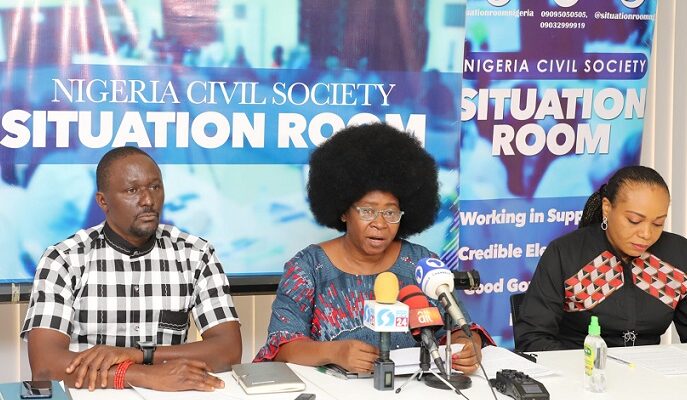 The Nigeria Civil Society Situation Room (Situation Room) has expressed disappointment over the State of the Nation and incidents that have taken place in the first and second quarter of the year 2022.

In a statement jointly signed by the convener, Ene Obi and co-conveners, Asma’u Joda and James Ugochukwu, Situation Room called on President Muhammadu Buhari to sack the Service Chiefs and appoint new persons with a clear mandate to deliver at a particular time or be equally removed like their predecessors.

Situation Room also called for the removal of the Governor of the Central Bank of Nigeria, Mr Godwin Emefiele to save the current deteriorating status and state of the CBN.

“A few months ago, Situation Room on 12th May 2022, raised alarm on the rising level of insecurity in the country, the level of transparency and accountability in the electoral process, among other concerns. It is rather disheartening that two months later, the State of the Nation has further depreciated thereby raising questions about the leadership of the country.

“The state of insecurity in the country has deteriorated so much that most parts of the country are now being threatened by non-state armed men with various nomenclature like Bandits, Boko Haram, Islamic State’s West Africa Province (ISWAP), Kidnappers and Unknown Gunmen.

“According to reports, ISWAP and Boko Haram insurgents having occupied some territories in the North-East of the country are now encroaching into Abuja and the rest of the Federal Capital Territory (FCT). Bandits continuous raid on villages fuelled with kidnapping of helpless villagers in the North-West States of Zamfara, Sokoto and Kebbi, have continued unchallenged. The abduction of road users on the Abuja – Kaduna highway has been a major concern, bearing in mind that some of the March 2022 passengers of the Abuja – Kaduna bound train are still in captivity.

“The economy is at its lowest ebb as the purchasing power of Nigerians has dwindled in the face of galloping inflation. Basic domestic commodities, power, energy and transportation are out of reach for the average Nigerian. National unemployment rate according to the National Bureau of Statistics stands at 33.3% while unemployment of the youths is 42.5%. The steady fall of the Naira is alarming, at an all-time low in the Nation’s history with no clear steps indicated by the Central Bank of Nigeria on how to rescue the Naira. Situation Room also notes the heavy depletion of the Excess Crude Account which ought to serve as a cushion to help stabilise the country’s economy,” the statement said.

Miffed by the recent attack on Kuje Medium Security Correctional Facility in Abuja leading to the release of high-profile terrorists from the prison without strong resistance from security personnel, despite 45 security reports and warnings of the imminent attack.

They called for thorough investigation into the jailbreak in Kuje Medium Security Correctional Facility, adding that those responsible for guarding the Prison should be relieved of their duties, starting from the Minister of Interior, Ogbeni Rauf Aregbesola.

Situation Room called on President Muhammadu Buhari to wake up to his responsibilities of steering the affairs of the nation in the areas of security and economic restoration which will rebuild the confidence of citizens by reassuring Nigerians of his ability to govern Nigeria or should honourably resign if the challenges are overwhelming.

Lastly, Situation Room called on Nigerian citizens to put their State Governors to task and demand accountability for their actions or inactions regarding the State of the Nation. Each citizen has certain responsibility and obligations that relate to active participation in society and government.