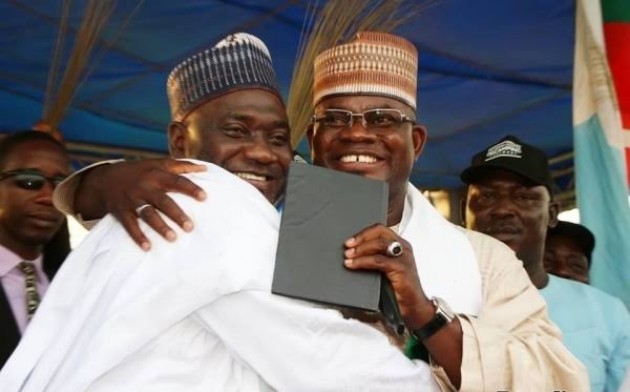 In contrast with what is obtained in advanced world, Nigeria’s government officials are petted to perform their duties, that is for those still with an element of humanity in them. They do not see the purpose for which they are saddled as an obligation but an act of compassion for which they must get accolade. It best described Senator Jibrin Isah Echocho’s  unwarranted perfidy and Bello’s audacious abandonment of the Eastern Kogi state. The duos’ sudden romance could best describe desperate motives whose reality fizzles like snow but are presumably sustained by the advent of the dew which itself does not last.

Senator Jibrin Isah is a corrupt profiteer who placed personal interest above the society, he is a notorious blamer and nitpicker who has lambasted and described Igala/Bassa as inconsiderable extortionists. Like every other person, he contested elections in 2011/2015 and lose, but he did not see his defeat as a regular procedure in democratic dispensation, instead, he held Igala/Bassa in contempt and has since deepened the veracity of his gripping bigotry as ethnic marksman. Prior to a successful electoral robbery in 2019, he attributed his victory to Yahaya Bello’s singular effort, describing the governor as his god on earth. Since then, he has jettisoned Kogi East while he practically worship Yahaya Bello from the senate. In tow, the defence of his gun-point victory aided by Buccaneers, persistent antagonism of public interest, and, deliberate efforts in facilitating Yahaya Bello’s corrupt activities. All these, and more had been capped in the latest social media announcement pruning sanity about Echocho handing invisible projects to Kogi state government— an act that has long staged the enfant terrible (Yahaya Bello) in Kogi East as a star boy in the midst of nothing. And, while the social media continually showcases GYB’s non-existent legacies in Kogi East, his real achievement are innumerable in the Central Kogi state, particularly Okene his place of ancestry. To be honest, emperor Yahaya Bello dealt ruthlessly with Kogi Easterners and as a senator representing the district, we expected Echocho to be up and doing defending the poor and exploited masses. The so called staff verification exercises instituted against civil servants was history’s greatest infamy. The percentage payment of salaries is a heinous crime against humanity, succeeding government may legalise it for two reasons; the rising debt profile and lack of vision. But what has Echocho done to protect his people as a Lawmaker? He simply look the other way and ensure the crimes are well perpetrated, and each time the Economic and Financial  Crime Commission comes knocking, he goes to plead on his (Bello) behalf.

As it stands, the much defrauded civil servants had reclined in the scabbard of fate and simply prayed for Yahaya Bello’s exit to come. Meanwhile, the governor’s corrupt activities in the state continues. He has inducted family and friends into the act, and they have stolen so much from the coffers. Bello is outrageously rich. He currently throws money around in purchase of Jury and the hand-picking of all APC candidates (Echocho inclusive) was a grand plan to enthrone himself as a HERO.

It started with the N260 million security vote he (GYB), in connivance with the then permanent secretary Rev. Ilemona John expended in a week as reimbursement for election spending. Against Nigeria’s commercial bank policy and in total degradations to due process, the perm. Sec was moving millions out of the bank in cash on daily basis. Whoever cares should visit premiumtimesng.com. The online investigative medium published factual reports on the 13th of May, 2016. It followed by series of allocations ranging from FAAC, Paris club refund- tranche one to three, ecological fund, world bank loans, African Development bank loans, CBN loans, internally generated revenue, and the recently disbursed derivation funds as oil producing state. Amidst the monumental increase in debt profile, what did the white lion’s government do with all the monies? Nothing! From Economy to infrastructure, social development and security, the young lad deliberately under performed and in place of infrastructure, several corrupt activities are attributed to the state government and the governor. The sterling Bank’s illicit fixed deposit along side how Ali Bello, GYB’s nephew defrauded Kogi state to the tune of N20 billion and N10 billion respectively is still fresh in our memory. But while the case fades before our very eyes with senator Jibrin Isah Echocho sleeping and waking up in EFCC’s corporate building, I wonder if Kogites will spare the governor should the anti graft agency carry out its duties in full context.

Kogi is so ill-fated with the advent of this crop of leaders. They are naturally vicious, power drunk and mendacious on every aspects. In short, Yahaya Bello’s acclaimed dictatorship is obvious. He loathes the people and workers he govern. From empirical facts, those of us who thought he would turn the page of the mineral rich state are utterly disappointed, seeing that there are no distinctiveness between the past and now. While he displays opulence, flaunts exotic cars and buildings in the highbrow areas in total contempt with the mood of the people, he stings whoever dares him. He sees himself as god and has since thwarted the power of the people. The arrest and subsequent disappearance of one Johnson Musa who exposed one of his acquired Abuja mansion at the time civil servants were committing suicide in Kogi remains indelible. Thisday newspaper July 29th, 2019 publication (back page) appeals to whoever cares. The sudden disappearance of several activists, inconsequential allocation of aides to family, friends and cronies, et al, played host to Yahaya Bello’s audacious brigandage. What this foretell is that, the men he has inaugurated ahead of the February election are securities to his corrupt empire and should be avoided.