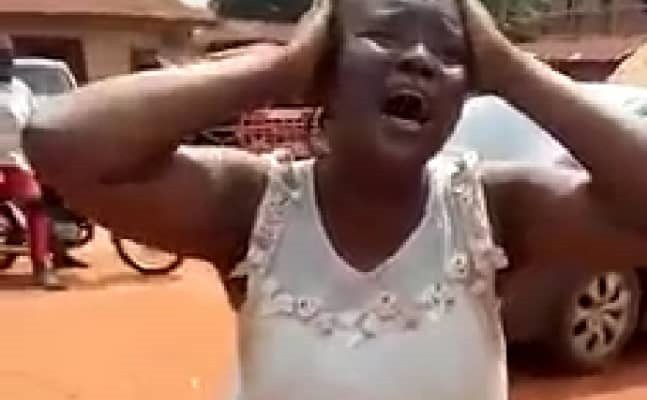 We wish to respond and straighten the records as follows:

1. That the said Feminist organization, the Public Defenders and the Nigerian Police have all been fed with falsehood premised deeply on emotions and sentiment and consequently their actions based on fabricated facts unilaterally supplied by the said Blessing is misleading, unfounded and will be challenged before the relevant authorities.2. That the entire episode started some two years ago when Mrs. Blessing who is fully married to one Mr Bamidele in Lagos whom she bore two children met Mr. Akoh Yakubu Abah and claimed to be a single lady, a staff of Access Bank and lured him into a marriage relationship. We have evidence of her overtures to friends and relatives of Mr. Abah persuading them to support her marriage to Abah.

2. That she pursued this goal surreptitiously and desperately while deliberately concealing the fact that she had a husband in Lagos with whom she had two children and went as far as declaring her singleness before the Living Faith Church, Ogugu in Olamaboro LGA of Kogi State where they were joined.

3. That unknown to the Late Abah, she continued to cohabitate with the said Mr. Bamidele even after their engagement in Ogugu and kept leading Abah on, an act she ought to know will cause the death of Mr. Abah under Ogugu custom and tradition.

4. That she eventually succeeded in persuading Mr. Abah into fixing the 31st October, 2020 for their Wedding at Ogugu at a time that she knew Mr. Abah was out of job having been relieved of his job with H Medix, Abuja where he worked hitherto. Further that Friends and families, the bulk of whom Mrs. Blessing accuse today came to the rescue and rallied support for Abah not knowing that the marriage was premised on falsehood.

5. That a week after the marriage, having stayed with Mr. Abah briefly in Abuja, Mrs. Blessing who earlier told Mr. Abah that she has been transferred to Abuja to be working from home insisted on traveling to Lagos, unknown to Late Mr. Abah, she has her husband and children to visit. She spent some two weeks and upon her return, Mr. Abah had an attack and suffered a very devastating health challenge, he had to live and die with the challenge.

6. That shortly after her return, the said Mr. Bamidele(Mrs Blessing’s Lagos husband) called Mr. Abah, accused him of snatching his wife and threatening to deal with him roothlessly should he fail to leave his wife for him adding that he will not live to tell the story.

7. That Mr. Abah raised this issue with Blessing, who denied same, alleging that she had no husband and that she had a Child but that same was raped some years back leading to the pregnancy, she added that she was been blackmailed and that Mr. Abah should not leave her.

8. Taking her words for truth, Mr. Abah engaged Mr. Bamidele on phone and had serious engagement with him thinking he was protecting his wife but Mr. Bamidele warned that he may not live long enough to tell his story.

9. True to Mr. Bamidele threat, Mr. Abah continued to have nightmares, bouts and his health strangely continue to fall apart. Against the lies of Mrs. Blessing, Mr. Abah was initially hospitalized at Pison Hospital in Kubwa Abuja at the expense of Family and Friends in late January, 2021, he was subsequently transfered to Gwagwalada Specialist University Teaching Hospital, at this point in February, 2021, Mrs. Blessing packed her belongings and left to join her husband and second family in Lagos while leaving Mr. Abah to his fate.

10. While in Gwagwalada receiving treatment, the signs that he was been afflicted by some spirit related ailments became apparent, on the directive of Family Elders he was taken to the village in Ogugu for tradi_medicals. While at home, it was ascertained that the immoral abominable acts of the wife was the cause of the illness and she was summoned to the village for confession and cleansing to save the life of Mr. Abah.

11. The first round of confession was half hearted as she only confessed to taking pills while being married to Abah, an abominable acts under Ogugu custom, the cleaning was done but unsuccessful.

12.  A second round was carried out when she confessed to a. have had three boyfriends after her engagement to Mr. Abah, got pregnant for each of them and aborted all b . To have a husband in Lagos with whom she had two children but one died.c. To have been taking pills after their marriage to avoid been pregnant for Mr. Abah.d. And several more.We have witnesses including family Elders, Mother if Late Mr. Abah, Mother of Mrs Blessing,  Eldest sister of Late Mr. Abah and his younger sister as witnesses to the said confession (Note that such confessions are usually done sacredly before the elders and close relations and never a public thing).

13. After this round, it was obvious that she was closed to the truth of her treacherous acts, the cleaning was done and was successful but alas, it was a little too late. Mr. Abah having satisfied the traditional aspect of the illness was thereafter taken to the Holley Memorial Hospital Ochadamu in Kogi State but was advised later to be taken elsewhere. On their way to the Enugu University Teaching Hospital, Abah died in the evening of 12th March, 2021.

14. Meanwhile, Mrs Blessing was in her own family compound where she stayed after her confession when Mr. Abah died, it was customary of her to move to Mr. Abah family house to bury and mourn him as his wife so that he will be buried as a full grown man. She stayed away all through the 12th and 14th March while the body lies in the mortuary. It was on the morning of 14th March, when the deceased was to be interred that a couple of Friends and relatives of the deceased went to Mrs. Blessing family house to demand that she follow them to participate in the burial of Mr. Abah, but she was adamant insisting that she has long ceased to be the wife of the Late Mr. Abah.

15. That at that point, the Elders intervened and she was left alone. It Should be however emphasized here that her conducts was the talk of town and that both the young and old in Ogugu were angered by same.it was the anger that was expressed by some very young fellows of the community who went to her family house at about 12 noon while family and relatives were preparing for the interment to bring her to the burial venue. While on their way, she insisted that she can’t participate in the burial and that led to the young men dropping her there and questioning her about her role in the death of the deceased.

16. The family and associates of Mr. Abah were so shocked to have been linked with a minor occurrence of expression of dissent to a very immoral and despicable acts of an individual member of a community who was neither beaten nor harrassed in any form not minding the mind blowing treacheries and attrocities committed by her leading to the death of Mr. Abah.

18. To add injury to salt, some Feminist organizations relying on some fabricated stories of the said Mrs. Blessing has petitioned the Kogi State Public Defenders and Commissioner of Police to orchetrate the arrest and humiliation of some relatives and associates of the deceased. We wish to add that these acts of these Feminist organizations is a gross disservice to societal values and coherence and same will be challenged with truth based on facts and that their hypocrisy, the treacheries of Blessing and all the conspiracy trailing same will be exposed.

We as the representative of the Late Mr. Abah have already forwarded our own petition to the Inspector General of Police, Abuja requesting for the transfer of the supposed matter to the Force Headquarters for proper investigation and handling.

This is a clear case of polyhandry by a woman premised on deceit and treachery leading to the threat to the life of the late Mr. Abah and subsequent death.

May it be known to the Feminist organizations and all supporting the fabricated case of Mrs. Blessing that we are fully ready to meet her at whatever as we Insist that she and her husband Mr. Bamidele who are responsible for the death of Late Mr. Abah should be arrested and prosecuted according to the Nigerian Law.