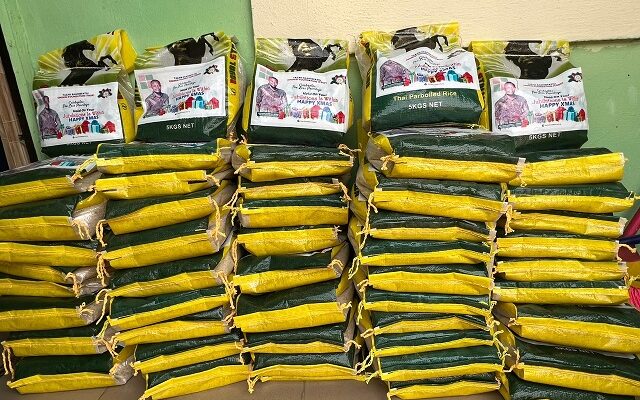 In his habit of reaching out to the needy in society, the Founder of the Tazan Foundation (TSOF), Amb. Tazan Saahibfatiu has donated foodstuffs to the less privileged in Lokoja, Kogi State capital.

Speaking to newsmen in Lokoja after the distribution of bags of rice across various locations, Amb. Tazan noted that reaching out to the needy during the festive period is a way of giving them a sense of belonging and putting smiles on their faces while celebrating with their households.

According to him, his foundation has taken it upon itself to focus more on humanitarian services, hence addressing and tackling poverty, poor health system, and sound educational standards at the grassroots.

He stressed that the less privileged will have nobody to care for them if those who can afford daily meals and have a source of income turn a blind eye against them.

Amb. Tazan added that the reason for the festive period is that everyone should be happy while having a lot to eat and drink with family and friends.

While congratulating and celebrating with all Christian faithful, he emphasized and pleaded that more help should be rendered to the needy, with a focus on those in the orphanages, beggars on the street, and neighbors.

He further urged that prayers for the nation should be made, to allow the will of God to be made manifest in electing leaders across various levels of government.

Mr. Ojo Ojoma who is one of the beneficiaries thanked the foundation for the show of love, while calling on well-meaning Nigerians to also extend a hand of love to the less privileged.