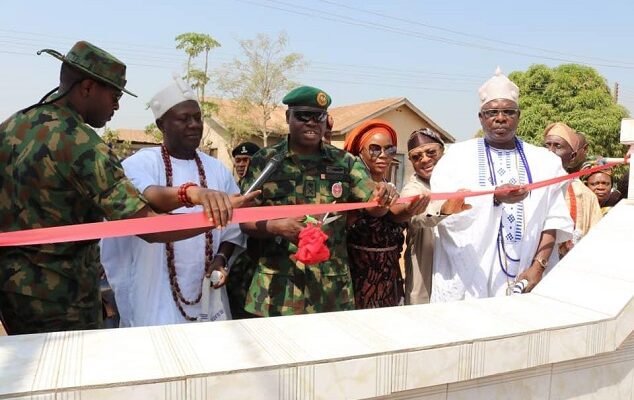 He noted that the Nigerian Army had over the years taken deliberate steps towards ensuring that it gives back to the society the cooperation it had enjoyed from the people by observing some corporate social responsibilities.

This, he said was very much in line with his vision of “a professional Nigerian Army, ready to accomplish assigned missions within a joint environment in defence of Nigeria”.

He stressed that in pursuance of the vision, he had ensured that Nigerian Army paid more attention to the non kinetic aspect of its operations.

He emphasised that the projects were quick impact projects executed by the Nigerian Army in various parts of the country towards contributing to National development.

”Thus, I believe this project will serve the collective needs of the members of Ekinrin-Adde communities and its immediate environs,” the COAS said.

The Army boss said that the Nigerian Army in conjunction with other security agencies are working assiduously to rip the country of criminal activities and all forms of insecurities facing it.

The Lt. Gen. appealed to the people to see the project as a symbol of friendship between the Nigerian Army and the communities.

”Let it foster the desired peace, progress and indeed bring prosperity to the community as well,” he said.

The COAS thanked President Muhammadu Buhari, for his continuous support to the Nigerian Army and for providing the conducive environment necessary to carry out their constitutional mandate.

He further thanked the Minister of Defence Maj. Gen Salihi Magashi (rtd) and Chief of Defence Staff, Gen Lucky Irabor for always providing direction and support to the Nigerian Army.

He thanked Governor Yahaya Bello, traditional fathers and all the good people of Kogi for their unrelenting support to the Nigerian Army.

Speaking on his own capacity, Maj-Gen. Igbinomwanhia, thanked the COAS for sponsoring several of those projects in Kogi under his area of responsibility, saying it would further boost security on the state.

”I will say I am also a beneficiary of these projects because it will have direct impacts on the security of the state,” he said.

He stressed that the Nigerian Army will not tolerate any act of indiscipline from any of its officer or soldier, saying the full wrath of the law will be on any erring personnel in the state.

He, therefore urged the people to be be confident to continue to support and cooperate with the Nigerian Army by giving credible information that would lead to arrest of criminal elements in the state.

On his part, Maj -Gen Michael Durowaiye, the projects’ Executor, thanked the COAS for his passion towards improving the wellbeing of his people and his financial commitment to the reality of the projects.

Durowaiye, who is the Executive Director, Nigerian Army Farms and Ranches Limited, said the gesture was a way of giving back to his root and ancestral home, to improve the wellbeing and standard of living of his people.

He noted that the intervention projects were part of efforts in demonstrating the Nigerian Army sensitive nature to the problems and aspirations of their host communities.

General Durowaiye stressed that it will no doubt also help to build a strong and sustainable relationship towards achieving the vision of the COAS.

In their remark, the Olu Adde of Ekinrin-Adde, HRM Oba Anthony Idowu; and the Olujumu of Ijumu, HRM Oba Williams Ayeni, both expressed their gratitude to the COAS for impacting the lives of their people with the projects.

The royal fathers stressed that the projects would improve the wellbeing of their people, and commended their son, Maj-Gen. Durowaiye for facilitating the projects.

Ayeni, who is the Chairman, Ijumu Local Government Traditional Council, thanked the COAS for ensuring adequate security in the community, the state and Nigeria at large, assuring that the projects will be adequately maintained and well protected.

The highlight of the event was the presentation of souvenirs to the COAS, the Commander Commander , the traditional rulers as well as the dignitaries at the occasion.