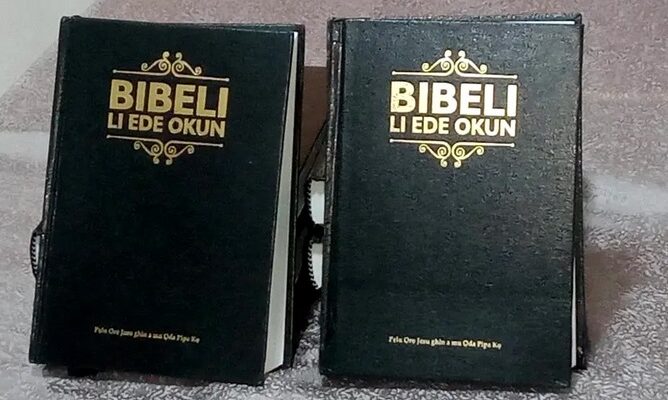 The Bible Society of Nigeria (BSN) has unveiled the fully translated Holy Bible in Okun, a Yoruba language dialect spoken in Kogi, Kwara and Ekiti States.

General Secretary and Chief Executive Officer of BSN, Pastor Samuel Sanusi said with the completion of the Okun translation, the society had set another record in Bible translation as the exercise was achieved in a record time of five years.

Sanusi made this known at a news conference in Lagos on Sunday.

“With this, we have broken the global record of Bible translation which we previously held for completing that of Igala common language in 11 years.

“The United Bible Societies (UBS) set a target of 12 years for the completion of any translation project. This has not been achieved by any society except the BSN,’’ Sanusi said.

According to him, speakers of the Okun dialect, known as Okun people are one of the Yoruba major ethnic groups.

He said that the translation of the Bible cost about N87 million.

The general secretary thanked individuals and organisations who donated towards the project.

Sanusi called on governments at all levels to work towards the preservation of the nation’s languages by enforcing their usage, especially in schools.

“Our Languages are our identities and an integral part of our cultures.

“By translating the Bible into Nigerian languages, we are helping to preserve the languages and cultures of our people.

“It costs a minimum of N120 million to complete a translation project if achieved in eight years,’’ Sanusi noted.

He said that the fully translated Bible in Okun Language would be dedicated on Nov. 3 at the Apostolic Church Nigeria, Agirigbon, Ayetoro-Gbede, Kogi.

He added that the BSN would dedicate additional 77 chronological Bible stories in the Nigerian sign language for the benefit of the hearing-impaired faithful.

He said that the dedication would hold on Nov. 26 at the Bible House, Research and Development Center, Ibadan.

“With this, we have completed a total of 222 chronological Bible stories.

“It is only the United States of America that has the full Bible in sign language in the world, and was achieved in 2020 after 38 years.

“We are trusting in God that a time will come when the deaf in Nigeria will have the full Bible in the Nigerian sign language,’’ Sanusi said.

He said that the BSN had also emerged as the global leader in English Bible distribution, a feat it achieved by distributing 1,145,232 copies of the English Bible in 2021.

He said that the Bible Society of America came second with a distribution figure of 1,118,174, while Kenya took third position having distributed 455,817 copies.

Sanusi sympathised with victims of recent flooding in the country and called on all tiers of government to do more in ameliorating their sufferings.