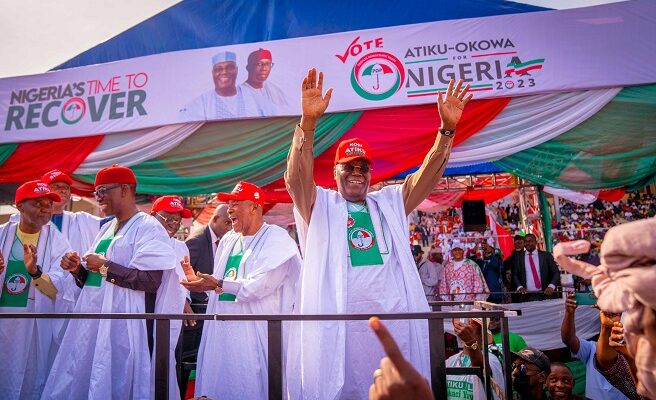 Presidential candidate of the Peoples Democratic Party (PDP), Atiku Abubakar has vowed to construct, reconstruct, and rehabilitate all federal roads in the state to ease commercial activities for the nation.

Atiku made the pledge in Lokoja on Saturday in continuation of his campaign rally ahead of the February general elections.

He promised to complete the inland ports in the state and resuscitate the Ajaokuta steel company, also in Kogi State, to serve as a catalyst for the industrial revolution for the country.

He expressed satisfaction with the large turnout of people to receive him and described the mammoth crowd as an indication of a people yearning for a positive change that would improve their standard of living.

Atiku promised that, if elected, he will support the state to pay salaries, and set aside $10 billion for job creation, to tackle incessant strikes in the nation’s Universities.

Speaking further, he described the party as a light over the ruling APC and expressed dissatisfaction with the dwindling standard of living, acute poverty, and gross insecurity across the country.

“Give us your support, the nightmare that was the challenge of the iron and steel company, Ajaokuta in Kogi State will be a thing of the past,” he said.

In a remark, former Governor of Kogi, Alhaji Ibrahim Idris described the hardship facing Kogi people under the APC administration as unprecedented in the annals of the state and assured that the PDP would win overwhelmingly in the coming general elections.

Another ex-Governor of the state, Captain Idris Wada said “Nigeria is a delicate and dangerous country. We need to elect competent, resourceful and intellectual person to make things work and carry us out of the present trouble the nation found itself. That person is the PDP candidate, Atiku Abubakar, who has seen it all.”

The presidential campaign rally witnessed the defection of many members of the All Progressives Congress (APC) to the PDP.

A former deputy governor of the state, Elder Simon Achuba, ex-Speaker of the State House of Assembly, Hon. Umar Ahmed Alfa and Hon. Yahaya Karaku dumped the APC alongside their supporters to PDP.

The national chairman of the PDP, Iyorchia Ayu, who received the defectors, urged the party members to receive them back into the party without discrimination for a resounding victory at the polls.

The former Deputy Governor, who spoke on behalf of the defectors, said they decided to come back to the party because the APC failed to fulfil its promises in the state since 2016 to date.