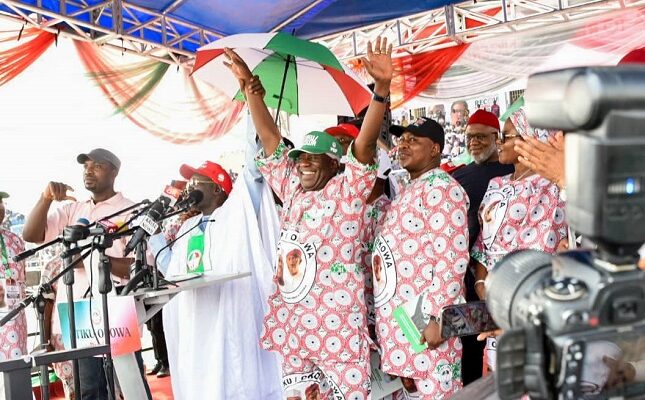 Former Okene Local Government Chairman and a senior aide to the Governor of Kogi state, Alhaji Yahaya Karaku, has dumped the camp of Governor Yahaya Bello and the All Progressives Congress (APC) for the Peoples Democratic Party (PDP).

Karaku officially dumped the APC and his former boss on Saturday during the presidential rally of PDP presidential candidate, Alhaji Atiku Abubakar at the Confluence Stadium, Lokoja, Kogi state capital.

Alhaji Karaku, who is widely regarded as one of the most influential and powerful grassroots mobilizer in Kogi central district, declared his unalloyed support for the candidacy of Atiku Abubakar, Kogi Central senatorial candidate, Barr. Natasha Akpoti-Uduaghan and other PDP candidates.

The former Okene LG chairman was received by the PDP National Chairman, Dr. Iyorchia Ayu and other PDP stakeholders.

Furthermore, the Campaign Council stated that it will continue to reach out and preach the message of hope of PDP and Barr. Natasha’s vision to change the narratives to win more political leaders from APC before the general elections.

The campaign stated that the quest to recover Nigeria from hopelessness is a business of all lovers of growth and development.