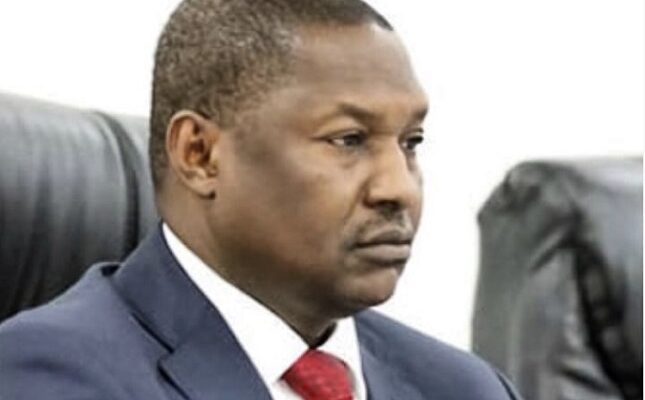 Alleged Corruption Syndicate: Why Malami Must be Investigated – CSOs

The Human and Environmental Development Agenda (HEDA), Corner House and RE:COMMON has written to President Muhammadu Buhari, seeking an independent investigative body to look into the alleged fraud syndicate within the Federal Ministry of Justice and condemning role of Minister for Justice and Attorney General of the Federation, Mr. Abubakar Malami SAN, in the Paris Club contract scam against States and Local Governments.

In a statement signed by the Chairman of HEDA, Olanrewaju Suraju, co-founder of Corner House, Nick Hildyard, and Programme Director of RE: COMMON, Antonio Tricarico, the groups said in other to guarantee confidence in the outcome of the inquiry, a thoroughgoing, independent investigation into the alleged fraud should be set up, hence it’s unwise for one to investigate oneself.

“The internal Ministry of Justice investigation been announced is wholly inadequate and will do nothing to assuage the concerns of the national and international anti-corruption community. Regardless of the qualifications and history of the five-member review panel, few can have confidence in a process that effectively allows the Ministry of Justice “to mark its own homework”.

They reminded the President of their earlier letter on same matter saying that all the allegations of mismanagement, corruption and fraud that hang over the Federal Ministry of Justice and its Minister, must not be handled with kid gloves.

“We have previously written to express our concerns about alleged corruption within the Ministry of Justice and its mismanagement by Attorney General Mr. Abubakar Malami SAN. We are therefore unsurprised, though nonetheless shocked, to read press reports that aides to the Attorney General, including his deputy director, have allegedly been selling off forfeited and recovered assets belonging to the Federal Republic of Nigeria and pocketing the proceeds. The reports also alleged the involvement of former members of the now defunct Ad Hoc Committee on the Sale of Non-essential FG Residential Houses in Abuja,”

“The Attorney General is said to have been unaware of the alleged criminality. If so, this brings his management of the Ministry further into question. It is mindboggling that hundreds of properties could have been sold without him knowing that the proceeds had gone missing,”

The CSOs maintained that with the forgoing, One was left with any of three possible conclusions thus: It’s either the AGF has turned a Nelsonian blind eye to the black hole that would have been apparent in the accounts; or he was incompetent; or he was complicit.

They affirmed that the above concerns were reinforced by AGF’s failure to act when the scandal first emerged, noting that it was over two months since elements of the alleged scam were exposed by the Independent Corrupt Practices and other Related Offences Commission, (ICPC) yet it was only then that the press reported the full extent of the alleged wrongdoing before Mr. Malami responded.

“As the saying goes, ‘Justice must not only be done, but be seen to be done’ and in this instance, both justice and good governance demands that an independent committee be set up under the aegis of an officer of the Federal Republic who is senior to the AGF.

“We note that when Ibrahim Magu, the former chairman of the Economic and Financial Crimes Commission (EFCC) was investigated, he was suspended from his post pending the outcome of an investigation conducted by an independent panel set up under your auspices.

“We see no reason why the same model should not be adopted to investigate the Ministry of Justice allegations, with the panel reporting either to you or HE the Vice President. We are aware of further allegations that have recently emerged relating to planned payments of $418 million to consultants that would be deducted from funds owning to state governments as a result of refunds from the Paris Club.

“We would therefore urge that the investigation’s terms of reference encompass these allegations. We are aware that a number of allegations of corruption have been made against Mr Malami in a Petition, which is attached, addressed to your office dated 20July, 2020.”

They added that the Ministry of Justice had regrettably earned itself a reputation internationally for malpractice and even worse, saying, “It is festering sore on the administration, delaying collaboration with prosecutorial authorities abroad and giving wholly contradictory signals on the OPL 245 case that seriously jeopardise the court cases that the Federal Republic of Nigeria is taking in London and Milan (where the lamentable acquittal of Shell and Eni is being appealed). These latest allegations are just the tip of an iceberg of concerns”.