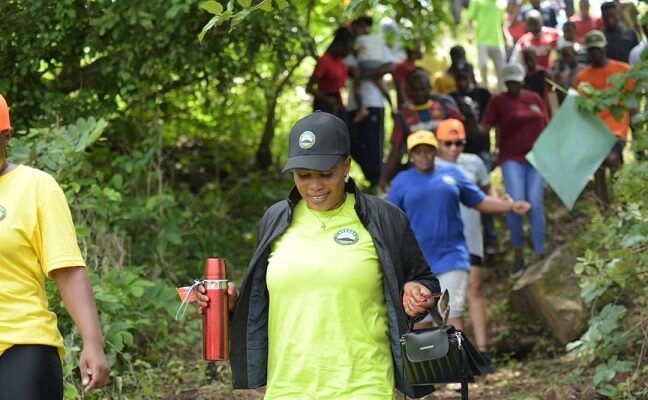 Mountain hiking is a long walk on the hills usually performed as a means of exercise. While some hike for pleasure, others hike for adventure, keeping fit and love for nature.

In some climes, mountain hiking is done as a competitive sport. Akogba mountain hike in Ekinrin-Adde Community in Ijumu Local government of Kogi State Nigeria, However, is aimed at bringing sons and daughters of Ekinrin Adde together in a friendly atmosphere while exploring the natural heritage of the beautiful ancient hill. The history of Akogba Mountain is as old as the community itself.

According to the traditional history of the mountain, There are some traditional worshippers and liberators of Akogba who were led by Iye Agongonde Amodede of Ekinrin aboriginal who passed over a hundred years ago. Her followers, according to reports still perform this ritual.

Akogba Mountain is believed by Ekinrin-Adde residents to be the major source of spring water for the people, especially during the dry season.

Akogba Mountain is a prominent hill sitting in the West of the Ekinrin Adde community at the altitude of about 3500 feet(1050m above sea level).

Mountain hiking in the ancient community of Ekinrin Adde is fast becoming another attraction for tourists and visitors, as well as the people of the community and its environs. People from the United States, the United Kingdom, Lagos, Abuja, and from other far away states converge on Ekinrin-Adde with their visitors and guest to explore the beautiful nature of the Akogba hill and the serene sight of the entire community from the hill top.

Akogba mountain hike usually comes up around June, before or after the annual Emidin Yam Festival. The maiden edition took place on the 18th of June 2021

On the 24th of June 2022, another historical adventure of Akogba mountain hike will be recorded when the town will again, be filled with hikers who will first converge at Oja Ode (the community market square) for medical check-ups before proceeding to hike the Akogba Mountain.

This year will be the second edition of Akogba mountain hike. Another good time for stars of Ekinrin Adde to be on the hill.