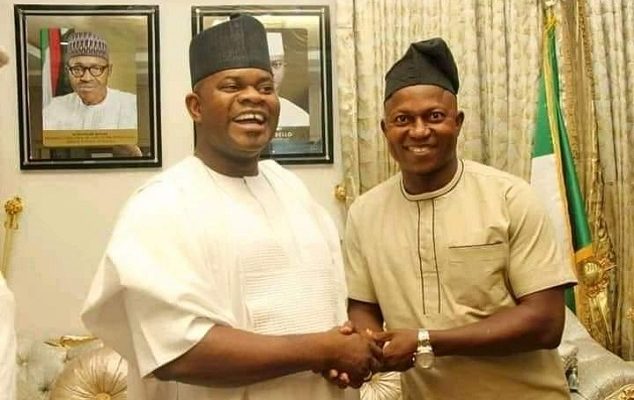 The 100 percent success achieved at the recent accreditation exercise conducted by the National Board for Technical Education (NBTE) in Kogi State Polytechnic, Lokoja, has been attributed to Governor Yahaya Adoza Bello, for his unflinching commitment to the development of education in the state.

Rector of the Polytechnic, Dr. Salisu Ogbo Usman, disclosed this on Tuesday while presenting the results of the accreditation to the State Commissioner for Education, Science and Technology, Honourable Wemi Jones.

The Rector stressed that Gov. Bello demonstrated exemplary commitment and relentless support which led to the huge success recorded.

Dr. Usman added that leadership and guide provided by the Honourable Commissioner of Education and the governing council led by Professor Yakubu Isa as well as quality working relationship enjoyed from the management, staff and students of the institution also contributed to the huge successes recorded.

The Rector who paid growing tributes to Governor Yahaya Adoza Bello for the opportunity granted him, also promised that more reforms will be introduced in the institution so as to place it among the comity of best Polytechnics in Nigeria.

The State Commissioner of Education, Science and Technology, Honourable Wemi Jones, commended Dr. Usman for his tremendous efforts in giving the institution a facelift in infrastructure and academic standards, and  noted that the successful accreditation by the institution was the mother of all for the state owned tertiary institutions.

Hon. Wemi Jones, who described Dr. Usman as a blessing and a perfect fit to manage the affairs of the Polytechnic, also promised that the Ministry would continue to provide necessary support to all parastatals and agencies of education in the State.

Meanwhile, the governing council of Kogi State Polytechnic has congratulated the Rector, Dr. Salisu Ogbo Usman on the full successes recorded at the Accreditation.

At its 66th meeting held on Friday 16th June, 2022, council commended Dr. Usman and his management team for the successful exercise which it described as another laudable effort under his leadership.

Council also lauded the polytechnic management for the peace, security, tremendous infrastructure and academic development on campus, just as he called for renewed collective efforts to achieve more.

Chairman of the governing council, Professor Yakubu Isa, noted that the Rector’s prudence in the management of scarce resources, transparency, selfless and meritorious service to the polytechnic has made the council’s task easy, just as he directed that a special award and commendation letter be presented to Dr. Usman.

Professor Isa also commended council members for their commitment, dedication and contribution to the rapid development experienced at the institution which has further rubbed on the state.

Spread the love
Tweet
Previous PostAkogba Mountain Hike: Stars on The Hill Next PostThe 10 Theses of the Winning Man (2)