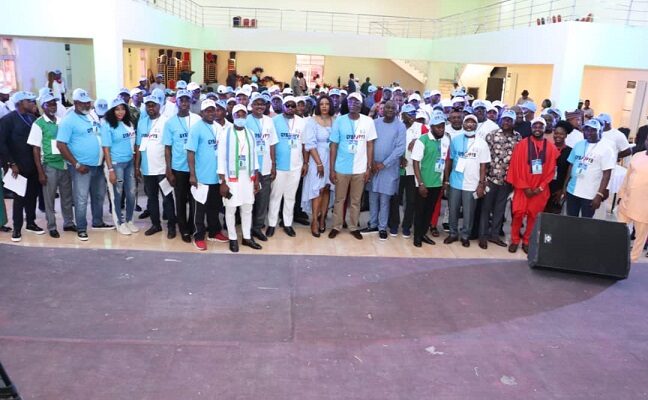 Lawmakers from the All Progressive Congress (APC) in the South South region has drummed support for the presidential aspiration of Gov. Yahaya Bello in 2023.

The lawmakers converged on Monday in Calabar to seek support for Gov. Bello under the “GYB 2 PYB Legislative Team 2023”.

Speaking, Mr Matthew Kolawole, Speaker of Kogi House of Assembly and National Coordinator of the Legislative Team, said it was time for a generational shift in governance.

Kolawole said that the lawmakers were ready to reshape and direct the political path of the country, hence the need to support a young personality for presidency in 2023.

According to him, the aspiration of Gov. Bello cannot be achieved without the support of the lawmakers because they play a critical role in governance.

“We are ready to be part of the generational shift that will create a political path in the governance of the country. We believe that we have the capacity to reach the people at the grassroot.

“Gov. Bello is eminently qualified to contest for the position of President in 2023. He is bold, courageous, and has the interest of the country at heart.

“I hereby solicit the support of all APC stakeholders in the South South and the entire Nigerian populace for Gov. Bello,” he said.

Speaker of Cross River House of Assembly, Mr Eteng Jonas-Williams, said that Nigeria was in dire need of a young and resourceful president come 2023.

Jonas-Williams said that the youths deserves an inclusion into governance in 2023.

According to him, the duty of moving the country forward rest on the shoulders of the youths, hence the need to support Bello.

In his remarks, the State Coordinator of the Legislative Team, Mr Hilary Bisong, who represents Boki II State Constituency in the Cross River House of Assembly, said that Gov. Bello’s aspiration was a youthful one.

Bisong, who said that across the globe, young people were been elected and appointed into leadership positions, commended Bello for aspiring to contest the presidential polls.

Deputy Speaker of Cross River House of Assembly, Mr Joseph Bassey, said that Gov. Bello has done well in the area of security in Kogi, hence he needs all the support for the presidency in 2023.

Obo said that the aspiration of Gov. Bello was a wake up call to all the youths in Nigeria that there a time for a generational shift in governance.

He said that as young people, they were proud of the many achievements of Gov. Bello in Kogi state, hence the need for youths to rally behind him.