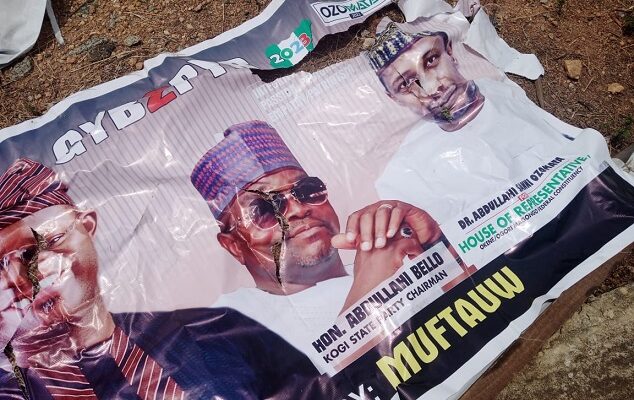 Tuesday, 8th of March 2022 has been described as a dark day in Kogi Central senatorial district when some disgruntled youths allegedly loyal to one Tijani Ahmed Ozigi(TAO) came out in their numbers to destroy campaign billboards located in strategic locations which are meant to project Dr. Abdullahi Sanni Ozomata and GYB2PYB agenda.

Dr. Abdullahi Sanni Ozomata Campaign Team, in a statement signed by Ahmed Ahutu, condemned the action of these thugs in strong terms, insisting that it is not in tune with modern democratic process.

The statement noted with regret that despite the enormous efforts put in place by Governor Yahaya Adoza Bello in tackling insecurity which has made Kogi State the safest in the country, some disgruntled elements of the society have decided to tow the path of violence.

According to the statement, the billboards which were located at Agassa and Okene General Hospital Junctions were damaged by the thugs.

It noted that this condemnable action was taken in order to spite the goodwill enjoyed by Dr. Abdullahi Sanni Ozomata over his support for the Yahaya Bello-led administration.

The statement explained that despite the provocation and the call for crisis, Dr. Abdullahi Sanni Ozomata 4 GYB2PYB Campaign Team has resolved to walk on the path of peace, hence calling on all aspirants to play the game with fairness and civility as there is life after politics.

Meanwhile Dr. Abdullahi Sanni Ozomata, as an advocate of peace while reacting, called on his teeming supporters not to be incited into anything that will jeopardize the peace in Kogi Central and in extension, Kogi State.

Dr. Ozomata noted that he was ready to sacrifice his ambition for the sake of peace currently enjoyed by the people of the area, he however said he cannot be cowed by any form of provocation or intimidation.

According to him, representation is about ideas, intellect and capacity that will add value to the constituents and not a war zone.

Dr. Ozomata Campaign Team has decided to report the callous behaviour of the youths to the appropriate quarters for further action.

Spread the love
Tweet
Previous PostActivist Queries Removal of Streetlights Without Replacement in Lokoja Next PostWhy Hon. Zaphania Bitrus Jisalo is Best Man to Represent Abuja Municipal-Bwari in the Senate