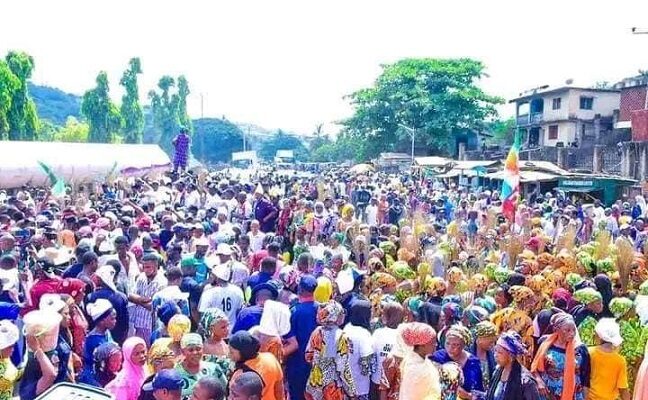 Ahead of 2023 general elections, the All Progressives Congress (APC), on Saturday, tested its numerical strength in Adavi local government area of Kogi state as thousands of supporters held a solidarity walk in support of the party candidates.

The event had in attendance thousands of Adavians, including appointees of the state and local governments.

The Local Government Chairman, who also doubles as the leader of the party and Campaign Council Coordinator in Adavi, Hon. Joseph Omuya Salami in his remarks, commended Governor Yahaya Bello for his relentless support and encouragement to his administration and the All Progressives Congress which he is acting under in his capacity in Adavi LGA.

The council Chairman stated that Governor Bello, who doubles as National Youth Coordinator for Tinubu/Shettima campaign council and leader of APC in Kogi state, has capacity to deliver massive votes for the party in 2023.

He further appreciated the party structure in Adavi led by the Local Government Party Chairman, Hon. Barnabas Oyibo for his contribution and commitment to party affairs which gave birth the crowd that came out to make this event a successful one.

“Words are not enough to appreciate our dedicated supporters and followers most especially our Women who have always mobilized and made sure they stand out whenever events are held for our great party. This set of dynamic beings have shown dedication and love beyond expectations by every measures”, the council boss remarked.

“The youths and our elders who have squeezed out time to be here today for the love of our party and appreciation to the Alh. Yahaya Bello’s led administration, I thank you specially and assure you that you will not labour in vein.”

Hon. Joseph Omuya urged the supporters of APC to sustain the tempo, noting that campaigns and other party activities doesn’t end with the solidarity walk.

He appealed that similar gesture be shown at the grassroots during Ward campaigns to prove that Adavi LGA is for APC.

He further urged party supporters to deliver 100% votes for the All Progressives Congress candidates starting from Presidential down to the State House of Assembly.

Spread the love
Tweet
Previous PostRep. Halims Doles Out 2 Million Naira at Grand Finale of Kogi State Quranic Competition Next PostNatasha: What's Her Crime, Where Did She Go Wrong?