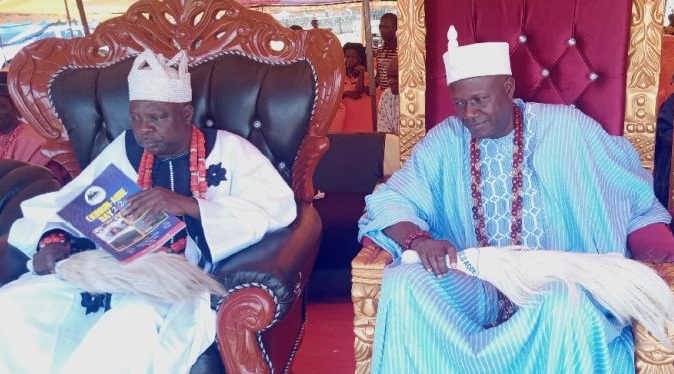 The Ekinrin Adde community in Ijumu local government area of Kogi state was agog as dignitaries from far and near trooped into the usually quiet town to celebrate the Emindin (New Yam) Festival and the annual Ekinrin-Adde Day carnival on Saturday, June 19, 2021.

Aside the glamorous cultural entertainment featuring cultural troupes from Ekinrin Adde and from as far as Benue State, the carnival reinforced the community’s position as a leading light in educational development.

Through self-help, Ekinrin Adde community built Baptist High School, the first secondary school in Ijumu land, in the year 1970. Ten years after, through community efforts again, they built Community Comprehensive College which was to shed the weight from Baptist High School which had become the destination of all quality education seekers in Okun land and around Nigeria.

However, the once leading and cherished secondary schools are currently in dire need of serious rehabilitation, hence, the 2021 Ekinrin Adde Day placed much emphasis on the launch of a N100m education infrastructure development fund under the chairmanship of the Baareselu Aare Onakakanfo of Yoruba Land and Chairman, House Committee on FERMA, Hon Olufemi Bamisile (MHR), and Dr Ramatu Tijjani Aliyu, Honourable Minister of State, FCT as lady chairperson of the day.

Ekinrin Adde had since learnt to bear its burden without recourse to government.

In his welcome address, the President of Ekinrin Adde Community Development Association (EACDA), Mr. Wilson Abiodun Olorunleke explained that it had become absolutely necessary for the community to gather and mobilize its resources towards revamping the fast-fading glory of its educational institutions.

“We have not only asked you to come here to savor our rich culture and heritage alone, we have also asked you to come and join us to salvage our dying educational institutions in other to save our collective futures. As you will all agree with me, that the best legacy and future we can all give to our children and youths is a sound education. It is worrisome today, that all over the nation, there is a seeming  decline in education and morals, this in turn, has given rise to different youthful exuberances and menacing vices.

“You may have heard the slogan that Ekinrin-Adde is a giant of self-help, this is very correct in so many ways. Ekinrin-Adde as a community has long learned that you cannot leave everything you want to do to the government because the government itself has a lot on its hands, if we have to wait for the government to help provide all our pressing needs, the wait might be too long, it might even take forever.

“Through self-help, Ekinrin-Adde built her primary schools, some of her churches, sunk and still maintain some boreholes for the provision of potable water for her people. Maintain her health care centers, built her town hall and numerous other viable projects that are not mentioned here.

“It may interest you, ladies and gentlemen, that just a few weeks ago, in order to help  government in stemming the tide of  the nagging security issues bedevlling our nation and particularly ijumu land, Ekinrin-Adde sons and daughters raised a huge amount to buy a security patrol van and two brand new motorcycles to  chase criminal elements,  kidnappers and their likes away from our land.

“With these aforementioned self-help projects, you will all agree with me that Ekinrin-Adde community  indeed realized a long time ago that charity begins at home.

“Ours is to move the community further up on the progressive ladder and we are trusting God, the indigenes of our community, and our guests to join us in this onerous task,” he said.

Olorunleke said the community needs N100million Naira to return these schools to their competitive old glory and accomplish its aim of getting the best and conducive learning environment for their children and future leaders.

HRH Oba Anthony Bamigbaiye Idowu, ACA (Ahe-Maworo I), Olu-Adde of Ekinrin Adde explained that the essence of the event was to profoundly thank God and their forebears, and celebrate and foster unity amongst sons and daughters of the community irrespective of religious beliefs, social status or political affiliations.

The monarch described this year’s event as more glorious than the previous ones, attributing it to the innovation which has brought uniqueness into the festival.

He called for robust donations from spirited invited guests to enable the community provide children of the area and others from far and near with quality education as he claimed that government alone cannot do it.

Also, notable sons and daughters of the community, who, in their various fields of endeavours, have done the community exceedingly proud were inducted into the ‘Omo Atata’ Hall of Fame.

Spread the love
Tweet
Previous PostHon Akaaba Celebrate Gov Bello @46, Describes Him as a Paragon of Credibility Next PostCandidates, Parents Express Frustration on Conduct of UTME at CBT Exam Centre in Kogi