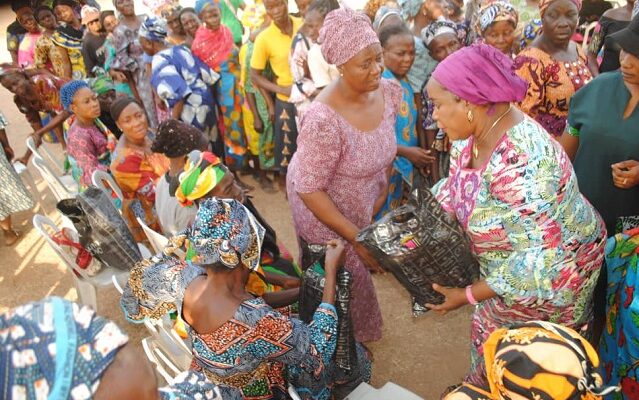 A non-governmental organisation, Doyin and Suzan Foundation, has donated foodstuffs and clothing materials to over 350 widows and Persons with Disability (PWDs) in some rural communities in Isanlu, Yagba East Local Government Area of Kogi.

The foundation also engaged the women in a dancing competition where three widows who emerged as winners received additional special gifts.

The founder of the organisation, Chief Mrs Adedoyin Ibikunle-Eshanumi, who launched the distribution in Isanlu on Friday, said the initiative was born out of her passion for the vulnerable group in the society.

According to her, the gesture is part of our organisation’s humanitarian vision to help the indigents and the vulnerable people in order to alleviate their suffering especially this festive period.

“In September, we fed more than 250 widows, we empowered 300 in October, and we thank God that we are able to reach out to over 350 vulnerable women during this yuletide season.

“We promise to reach out to more beneficiaries in the years ahead by God’s grace,’’ Ibikunle-Eshanumi said.

Eshanumi, a philanthropist and a former Senatorial Aspirant, APC Kogi West, said she had also on several occasions facilitated employments in Federal Parastatals  for many youths in the senatorial district.

The former APC senatorial aspirant said she had on December 13, secured fresh employment for another two youths in the district.

She said the gesture was part of her commitment and passion to reduce unemployment in the district by using her influence and all available resources to alleviate the suffering of her people.

She restated her commitment to continue to deliver on her promises especially to help the youths of the zone secure jobs and put food on their tables.

She stressed that the gesture was not politically motivated or induced, but being promoted by her zeal and commitment to reduce unemployment rate and youth restiveness to see the teeming jobless youths of the zone gainfully employed.

The philanthropist added that she had also awarded several scholarships to hundreds of indigent students in the area.

She commended the efforts of the federal and state governments in alleviating the suffering of the people, especially the vulnerable in the society, noting that government could not do it alone.

Ibikunle-Eshanumi urged corporate organisations and well-spirited individuals to partner with the foundation in reaching out to more vulnerable people in the society.

Three of the beneficiaries, Mrs Funke Adebayo, Mrs Modupe Ayodele, and Mrs Toyin Matthew, all thanked the foundation for alleviating their sufferings by feeding them and their children during the festive period and always.

They prayed to God to continue to bless, protect her, and grant all her heart desires, so that she could continue to do more.